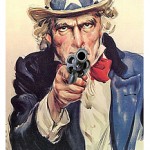 KentForLiberty.com | I can dislike something and still not want government to make or enforce “laws” against it.

I can dislike a person and still not want government or its “laws” used against that person.

I can HATE someone and still object to force being initiated against them or their property being violated. By anyone. Even if I believe they “deserve” it in a karmic sense.

I can like something and still not want you to be forced to fund it.

I can love someone and still acknowledge they are dead wrong if they initiate force or violate private property.

Why can’t statists do that?

Instead, they focus on silly things like “respect the office even if you don’t like the person holding it”. What horrible drivel! The office is the problem. Without that office, the evil fool holding that office couldn’t hurt you from behind his veil of imaginary legitimacy. If he violated you, you could defend yourself without having his gang, numbering in the millions, coming after you.

And, yet, I am still willing to leave statists alone. But they can’t seem to return the courtesy. I just don’t understand that mindset at all.

The Longest Running Case Of Mass Hysteria →
← On Illegal Immigration

Healthy people are those who live in healthy homes on a healthy diet; in an environment equally fit for birth, growth work, healing, and dying... Healthy people need no bureaucratic interference to mate, give birth, share the human condition and die.Ivan Illich … (next quote)

Stay Away From Chemotherapy and Radiation