Font
Why Can’t Statists Act Civilized? →
← When The Police Pull You Over 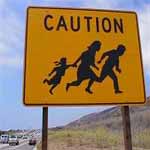 I got into an interesting “debate” on the EVC Facebook page after sharing this Two Cents post on illegal immigration.

Mark Taylor: Well that’s just pedantic as hell. You can also sugar coat a turd and call it a candy bar, but that doesn’t change what it actually is.

MT: Pedantry as a rationale isn’t very convincing to others, and is only satisfying to the pedant themselves.

MT: Aha, I see… so it’s to be more linguistic pedantry. Would you have preferred, instead of the word “rationale”, the phrase “rationalization for” or “excuse for”? Willfully torturing a person’s words to misinterpret and discredit them, while using that “error” to avoid addressing their point, isn’t very intellectually honest. I’m quite disappointed in what you are doing here. Simply put, the post was pedantically trying to justify that “illegal immigration” is in some way a fallacious concept. It was “playing word games” to rationalize a political stance. The US borders factually exist. The federal government has immigration laws (which also factually exist) regarding the crossing of those borders. If people cross US borders in violation of those laws, regardless of their reasons and excuse for doing so, they have broken federal law. Their **immigration** was therefore done **illegally** in the eyes of the US government. Ergo it was an “illegal immigration”. Go full pedant if you want; it doesn’t change the facts.

SC: Do you have any factual evidence that US federal immigration laws apply to anyone crossing said borders (as described in US federal law)? If so, please present it.

MT: That sounds like the love child of tautology and pedantry. If you have an actual point, question, or theory then state it plainly instead of all this dancing around.

SC: Are you trying to pass the burden of proof to me? It’s your claim that there is factual evidence on the applicability of federal immigration law (or any federal laws), not mine. Present your facts and evidence, or move on knowing there isn’t any.

MT: Oh, really? That’s “my claim”? Please, show where I claimed it. Quote me. I only claimed your position here was based on pedantry, word-games, and ultimately a tautology.

MT: “Applicable”… I don’t think that words means what you want it to mean…


Proving the laws are INapplicable is YOUR burden of proof, since you’ve made that claim, over and over.

MT
: OMG… “appeal to violence”. Keep on living in your unrealistic utopian fantasy universe where anarchy can exist for more than a day. In the real universe there are always sheep, sheepdogs, and wolves, and ALL anarchy quickly devolves into minarchy at the local level, and grows larger from there if left unchecked.

SC: What does any thing you wrote have to do with the challenge at hand?

MT: I see no challenge worth rising to, especially since you haven’t risen to mine above. Where’s your video showing that your fundamental thesis is both realistic and correct? Show me how “laws aren’t enforceable”. I believe they are, and that your claim is pure fantasy.

SC: Passing the burden of proof, again. Nice. Not sure why you ever responded to the challenge if you “see no challenge worth rising to.”

MT: Why did I reply? Because it’s difficult to call a “challenge” lame without actually responding to it. Allow me to further expound… You offered up a purely philosophical and subjective opinion as a “premise” — very non-science and non-logic of you — and then you “challenged” others to “disprove” what you yourself cannot prove. It’s lame.

SC: My premise is that something doesn’t exist. There’s nothing philosophical or subjective about that. If I said there is not an elephant in my office right now, would that be philosophical and subjective? Please. Someone here is certainly being non-logical and non-scientific.

MT: Your premise was that something fairly intangible doesn’t exist (which is lame, and difficult to disprove). So I turned it around on you, to make it more tangible, by saying if you are so certain that it doesn’t exist you should put your money where your mouth is and directly test your theory by flaunting your disregard for the law on video to see what happens. You ignored, avoided, and disparaged that challenge. What are you afraid of – Being arrested for something that doesn’t exist?

SC: It sounds like you’re argument is that because people with guns *believe* the law applies (and are willing to enforce it), that’s proof positive that it does. Could I behave that way with my guns, and you’d be okay with that?

MT: I believe your fear is not over their guns, which they won’t use unless you do, but that your fear is because you know the law is clear and that you are subject to it, whether you agree with it or not. You are direly conflating “not agreeing with something” with “the something doesn’t exist”. I assure you, it exists. And your fear and anger are proof.

MT: Boiled down to a quip: “If the influence of the law doesn’t factually exist, then why are you getting your panties in such a massive wad over it? It doesn’t exist!” Your anger, huff, and fear all prove it does exists

SC: Influence is not the same thing as applicability. I see now why your confused.

MT: Applicability is a weasel word. It applies to you whether you like it or not.

SC: That’s an opinion, not a fact. Try again.

MT: In fact, no… never mind… This conversation has demonstrated quite clearly how circuitous your reasoning is: You justify idea 1 with idea 2, and idea 2 with idea 1. You deal out your own subjective opinions and philosophies as if they concrete facts that cannot be challenges, and then you treat counter-challenges with contempt. You don’t impress me as a logician or philosopher… Rather, you strike me as a typical “utopian anarchist” whose ideas work great in a “thought experiment” lab setting where variables can be controlled or even overlooked, but whose ideas consistently fail in the real world where people are variously greedy, generous, pleasant, mean, adventurous, sheepish, charismatic, autistic, stupid, wily, strong, weak, lazy, motivated, etc, etc. There will ALWAYS be a hierarchy of government, because the timid and inept in every community will always defer opinions and actions to the stronger, more charismatic and adventurous. And the latter will form coalitions and treaties with their neighboring region’s leaders, and so on and on until there is national and world government. It’s inevitable. The re-building of government starts the same second that sudden anarchy scatters it. There will always be rules, and “rebels” will always pretend they are above them (while cowering from being seen breaking them).

MT: Tell yourself that if it comforts you.

SC: Any facts on the applicability of state law, yet? Let me know when you find some.

MT: Any facts, like a video, proving that they AREN’T applicable to you yet? Let me know if you nut up.

SC: Complete your challenge before passing the buck. You obviously can’t. Which is why you’re trying to turn it around. Intellectually dishonest.

MT: No, I can’t complete your intellectually-dishonestly/lame challenge because you’ve essentially “challenged” people to “prove a negative”. So I did the logical thing and countered asking you to demonstrate what should be an EASILY-shown positive case. Which you clearly won’t even consider attempting because you don’t believe your own words.

SC: You think I’m the one asking people to prove a negative? Didn’t you just challenge me to prove that state laws aren’t applicable? Uhh. Wut.

MT: So sorry for you that you that you are finding this simple concept so hard to grasp… You are the one claiming the laws “aren’t applicable”, which is actually a pretty vague and weasely phrasing, but whatever. And my point is that **IF** your claim were true, then you could EASILY demonstrate that they aren’t applicable (at least to you) by violating them in the public eye, and showing how nothing happens to you. I already know they are applicable to everyone else — a statement that has exactly zero to do with whether or not I agree with those laws, but only with them being your much desired proof that the laws clearly are applicable whether or not you like it. At least they are here in what some people refer to as “the real world”.

SC: Being attacked for violating someone’s law could not prove applicability. All it would prove is a belief in applicability, an opinion. What facts is that opinion based on? That is your challenge, not mine.

MT: Actually, my only challenge here has been seeing just how long I could endure wasting time on this irrelevant philosophical masturbation of yours. God knows, as a libertarian who likes to hear others’ *tangible* and *relevant* ideas about the world, I’ve tried countless times to have meaningful and civil conversations with anarchists about the *real* world. But (so far) you all just seem to live in a philosophical fairy land that bears no resemblance to the real world (I listed some of the real-world influences that you ignore a few days ago, if you even bothered to read it). It will be no loss to me when I go click the unsub button on what has been another failed attempt at finding an anarchist who was grounded in reality rather than fantasy and philosophy.

SC: It’s ironic that the one asking for facts (reality) is being accused of living in a fairy land.

MT: No, what’s actually ironic here is someone who “asks for facts” but then refuses to discuss the tangible world, instead digging their heels deeply into a philosophical fantasy world where reality doesn’t matter. …Or to put it another way, I agree that most laws SHOULDN’T apply, but since I live in the real world, I will not claim that they DON’T apply. They clearly do. That very same admission is exactly what you are incapable of making.

SC: “they clearly do” says the man who can’t provide any facts (reality) to prove it. You’re not getting anywhere with me because you’re being non-responsive.

MT: I responded repeatedly, with concrete reality; you just chose to ignore it all, with fingers deeply in your ears. Having already unsubbed yesterday, I guess I’ll also have to resort to blocking your mentally defective, self-loving responses, too…

SC: All you’ve provided are opinions, that some men and women consider their laws as applicable, and are willing to use violence to “prove” it. Opinions enforced by violence. That’s all you’ve managed to show. Not facts.

MT: You’ve provided nothing but opinions, yourself. Empty claims that you cannot prove. Not facts. I at least pointed to how things ACTUALLY WORK in the real world.

SC: I’m not trying to present facts. I’m the one CALLING for them. If they don’t exist, than there are certain logical conclusions to be made, one of which I’ve offered. All you’ve offered are opinions and potentialities, neither of which prove the ACTUAL applicability of state law.

SC: Good, cause I’m not. Re-read what I’ve written. I’ve only drawn logical conclusions based on a LACK of facts.

MT: Why would I want to go back and reread a page that I unsubscribed from yesterday? The only reason we’re still talking is because you seem to be really thick-headed about my departure, and keep regurgitating yourself. But I’m going to solve that for good now by actively blocking you from my feed.

Why Can’t Statists Act Civilized? →
← When The Police Pull You Over

The real sin of idolatry is always committed on behalf of something similar to the State.Simone Weil … (next quote)

Policing For Profit – The Abuse of Civil Asset Forfeiture

Public Schooling And The National-Security State

The Only Game in Town