Font
A Vast Improvement in Peace, Harmony and Justice →
← It Doesn’t Even Matter What The Law Is

Vietnam Was No Business Of The U.S. Government 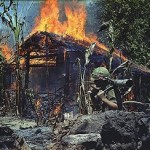 FFF.org | If the U.S. national-security state had won the Vietnam War, we all know what they would be teaching children today in America’s public (i.e., government) schools. They would be saying, “If the United States had not intervened in Vietnam, we would all be speaking Vietnamese today.” After all, isn’t that what they say about FDR’s decision to involve America in World War II—“If the United States hadn’t intervened in World War II, we would all be speaking German today”?

And that’s precisely what the Pentagon and the CIA were saying back in the 1960s — that U.S. “national security” depended on conscripting American men and forcing them to kill and die thousands of miles away in Southeast Asia. If the United States failed to intervene in Vietnam’s civil war, we were told, the dominoes would start to fall and ultimately reach the United States, at which point the communists would take control over the Interstate Highway System, the IRS, Social Security, and the rest of the federal government.

We were also told that American troops were killing and dying in Vietnam to protect our “rights and freedoms” — the same tripe that we hear today to justify U.S. interventions in Afghanistan, the Middle East, and other parts of the world.

It was all a lie. North Vietnam never attacked the rights and freedoms of the American people. Its military actions were limited to their own country in an attempt to unify their country. And no, North Vietnam never had any interest — or even the financial or military means — in crossing the Pacific and invading, conquering, and occupying the United States.

It wasn’t the only lie that U.S. officials told to justify their war in Vietnam. Don’t forget the infamous Gulf of Tonkin lie, the one they used to garner congressional support for expanding their war in Vietnam and for bombing the people of North Vietnam. President Johnson and his national-security establishment claimed, falsely, that North Vietnam had attacked U.S. warships in the Gulf of Tonkin. Of course, a similar trick would be used decades later when a fake and false WMD scare was used to garner support for the U.S. invasion and occupation of Iraq.

One glaring fact remains about the Vietnam War: The United States is still standing, despite the fact that the communists won the war. The dominoes did not fall. The Interstate Highway System, the IRS, and Social Security remain under the control of American bureaucrats, not Vietnamese bureaucrats. Americans continue to speak English.

It was all a total waste of American life and Vietnamese life. The fact is that Vietnam was none of the U.S. national-security state’s business.

How many Americans would have voluntarily gone to Vietnam to fight on the side of South Vietnam if the U.S. government had not intervened in the conflict? About the same number who are travelling to Iraq to protect U.S. “national security” from ISIS — at most only a handful. Certainly not dozens, hundreds, thousands, tens of thousands, or hundreds of thousands, which were the number of U.S. soldiers that were forced to go the Vietnam.

A Vast Improvement in Peace, Harmony and Justice →
← It Doesn’t Even Matter What The Law Is

The original *QUESTION* posed that led to the invention of Onion Routing was, 'Can we build a system that allows for bi-directional communications over the Internet where the source and destination cannot be determined by a mid-point?' The *PURPOSE* was for DoD / Intelligence usage (open source intelligence gathering, covering of forward deployed assets, whatever).Michael Reed
an original developer of the onion (TOR) routing program … (next quote)

The System Needs Us, We Don’t Need the System