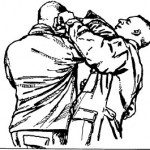 Flag.Blackened.net | OBJECTION #3: The use of force, even retaliatory force, cannot be left to the discretion of individuals. Peaceful co-existence is impossible if people have to worry constantly about their neighbors clubbing them at any moment.

ANSWER: There are several implied fallacies in this objection:

1) that in a system of non-coercive or natural justice, that is, in an anarchist world, people will naturally degenerate into vile creatures and turn on their neighbors. There will be a war of all against all. (See Objection #4.)

2) that people will quite naturally turn to the club as the foundation of all their social relationships. Violence is viewed as the most effective method of securing valuable human relationships.

As anarchists, we say with Benjamin Tucker: “the State takes advantage of its monopoly of defense to furnish invasion instead of protection.” Because we rightly fear power in anyone’s hands, we recognize the foolhardiness of establishing a government with a monopoly of power and then expecting that government not to abuse that power. If it’s dangerous to allow individuals to protect themselves, how much more dangerous it is to give that power to government. Read Entire Article

The Europeans, who must be forced to do Good, and have no other Prompter for the avoiding of Evil than the fear of Punishment.Chief Kondiaronk
Seventeenth-Century Huron Chief … (next quote)