CHNM.GMU.edu | With the Compromise of 1850, Congress agreed to admit California to the U.S. as a free state; to allow slavery in the new territories of New Mexico and Utah; to prohibit the slave trade in Washington, D.C.; and to pass the Fugitive Slave Law. The Fugitive Slave Law denied a jury trial to anyone accused of escaping from slavery; gave marshals tremendous leeway to pursue slaves into free states; and empowered the federal government to prosecute northerners who shielded runaways. This law shocked northerners and drew them into the conflict over slavery in an unprecedented way. Violent and sometimes lethal encounters pitted fugitive slaves (and sometimes free African Americans who were seized as if they were escaped slaves) and their white allies against southern pursuers. This notice, posted in Boston by abolitionist Theodore Parker in 1851, reflects the new atmosphere in the North for African Americans, one marked by an ever-present fear of kidnapping and conflict. 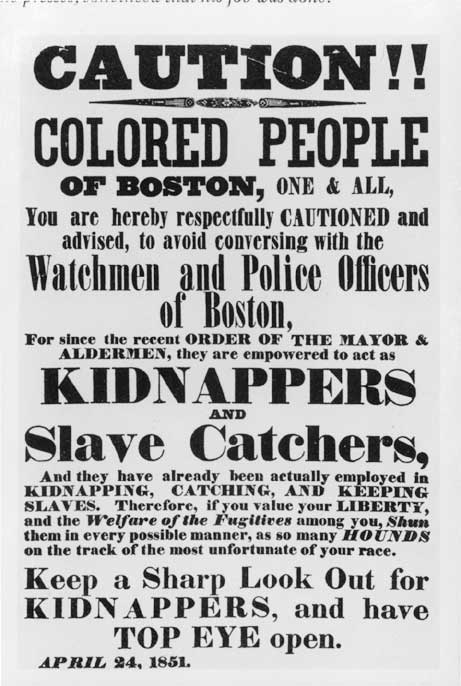 War is like a big machine that no one really knows how to run and when it gets out of control it ends up destroying the things you thought you were fighting for, and a lot of other things you kinda forgot you had.Anonymous … (next quote)