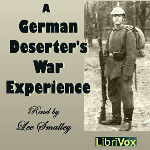 The author of this 1917 narrative, who escaped from Germany and military service after 14 months of fighting in France, did not wish to have his name made public, fearing reprisals against his relatives. The vivid description of the life of a common German soldier during “The Great War” aroused much interest when it was published in the United States in serial form. Here was a warrior against his will, a hater of militarism for whom there was no romance in war, but only butchery and brutality, grime and vermin, inhuman toil and degradation. His story also contains the first German description of the retreat of the Teutonic armies after the battle of the Marne.

LibriVox recordings are Public Domain in the USA.
Download – http://librivox.org/a-german-deserters-war-experience-by-anonymous/

Freedom is about the willingness of every single human being to cede to lawful authority a great deal of discretion about what you do and how you do it.Rudy Guiliani
Mayor of New York City in 1994 … (next quote)