Flag.Blackened.net | OBJECTION #4: Anarchism must ultimately lead to violence, to a war of all against all. Without some institution to define the rules of social life and enforce those rules, there will be chaos.

ANSWER: This objection rests upon a basic but always recurring fallacy – the notion that men are by nature anti-social and anti-cooperative. And just as wrongly, it proposes government as the solution to man’s supposed inclination to destroy or injure all of his fellow humans. This is a positively absurd concept of man’s nature and is topped only by the even more absurd faith government preachers have in an assumed benevolent nature of government.

Government does not spring from some fancied weakness in human nature that demands it exist to protect us from each other. Rather, it is created by conquest and is a tool used by a ruling clique to rule and exploit others.

The idea that government springs from man’s wickedness, yet itself somehow remaining immune to that wickedness, has been rumbling around in the heads of government apologists for centuries. But, how can imperfect men be given power over their fellow men and be expected to use the power in any but an imperfect way? The mystique of the state apparently makes that question unnecessary for government believers to answer.

Imperfect men driven by imperfect motives somehow, by the theory of government apologists, create perfect or near perfect mechanisms for settling the most pressing problems that afflict men. If there is any theory that qualifies for the land of make-believe, it is this faith in the wisdom, justice, and benevolence of government.

We can, and as anarchists, we do recognize that some people, regardless of the social system involved, will take advantage of others. We deny that this exploitation will be widespread and we can point to solid social evidence to prove our position. What violence there is will be sporadic and short-lived and will have no relation to the bogeyman of “war of all against all” preached by anti-anarchists. Though disputes will not be widespread, or numerous, they will, however, occur.

We must find ways to protect ourselves from predators. But we suggest that the way to do that is not to give people naturally bent toward predation (politicians and other power seekers) a sanctioned means to control us.

In addition to recognizing that there will be no general “war of all against all” in an anarchist world, it is important to note, in dealing with this objection, that between anarchists and statists there is a fundamental difference in their approach to dealing with human problems. It was outlined well by Fred Woodworth in his interesting pamphlet on “Anarchism,” when he wrote:

Whereas ordinary people will normally rank interpersonal violence as a last resort of social breakdown or crisis, government operates with violence as its immediate priority; determined course of action are decreed, not voluntarily decided upon; ordered, not freely accepted. If the principle of government were extended consistently and uniformly throughout society, true chaos would result – every civilized relationship would give way to the gun or knife; force, not persuasion. We have only the principle of Anarchy operating – the principle of no compulsion – to thank for the fact that the present social condition is not as faulty as it might be. Numerous social interactions even today still taKe place with an absence of compulsion, although State-ordained procedures are of course increasing daily. In the remaining spontaneous relationships between persons there is no ubiquitous policeman interceding (yet); nonetheless, most transactions, conversations, even quarrels, are accomplished without resort to coercion. Government’s standard operating procedure is to use coercion first and discuss matters afterward: “Under penalty of three years in the federal penitentiary or $10,000 fine, or both, you are herewith required to..” etc. This reversal of proper order, and exaggerated tendency to resort to force, is completely typical of governments; the tendency to place social compulsion uppermost is certainly not natural or justified. It should be noted that even those people who defend government get along fine without it in their relations with friends or neighbors, most of the time, and woud think a person rude, insulting, and violent who behaved privately as governments do publicly.

Without government and the power government has to deliver a regimented “justice,” people would have no effective or sustained means of dominating their neighbors. Without government they would have to deal with each other as equals and use persuasion and compromise as the basic tools of their social relationships.

But with government, they can short-circuit all the natural social bonds people create to peacefully settle problems. They don’t need to persuade; they can club you into submission. They don’t need to deal with you directly, they can manipulate a third party to do their bullying for them. Neighbors are driven apart by government. When there is force involved, the ties developed by natural society are crushed.

Left to themselves, people will develop their own rules of social life. These rules need not be uniform in all places, and there need be no one special method of enforcing them. People will naturally find their own solutions to problems and their own ways of establishing and defining the rules of their social life. As anarchists we do not dictate what social institutions will be used to deal with crime. People will have to discover them for themselves.

It’s not anarchism that breeds chaos. To government belongs that responsibility. It is not the anarchists who are the violent members of society – it’s the government rulers that hold that distinction. Read Entire Article 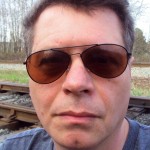 As an 'atheist artist', some people will ask me a philosophical question: 'What is the meaning of art in your view?' And I answered thusly: Artists are creative individuals. The whole idea of God is a product of the human imagination. It takes a great deal of creativity to conceive a master creator. But it was people who created God.Victor Pross … (next quote)