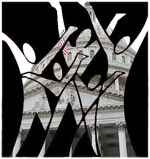 C4SS.org | A few years ago the Springdale, Arkansas school system constructed a second high school. The first week it was open for classes in the fall, I saw the first “spirit” stickers with the team mascot. Here was a school created entirely from scratch, and the team’s name and mascot similarly created by a committee of middle aged white men in suits—and a bunch of teenagers were already demonstrating their “loyalty” to it in only a week’s time. It’s about like that team of TV execs on The Simpsons creating the “Poochie” character. “Wow, he’s got attitude–just look at those sunglasses!”

This is typical. From our early childhood, most of us are taught to feel loyalty to institutions in whose agendas we have no say and whose leaders are utterly unaccountable to us.

Our lives are almost completely governed by a cluster of large, centralized, hierarchical, bureaucratic institutions, with the state at their center, over which we have almost no control. Even the ones that are formally democratic, like governments, are in fact run mostly for the benefit of connected insiders.

Butler Shaffer’s distinction between “organizations” and “institutions” is useful here. It’s possible to be the former without being the latter, if an organization is an instrument by which its members pursue their own purposes. An organization becomes an institution when it exists primarily for its own ends, or rather the ends of those running it, and treats its members and clients as means to those ends.

The management of large institutions, thanks to being directly a part of the state system of power, or indirectly a part of it by being in an industry which is to some extent cartelized by the state, is insulated both from accountability and from the consequences of its own decisions. Hierarchy is a tool for shifting effort and consequences downward, and benefits upward, and getting powerless people to do things that they have no rational interest in doing for its own sake. Read Entire Article 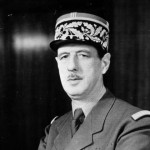 In order to become the master, the politician poses as the servant.Charles de Gaulle … (next quote)

Humanity Is On The Brink Of Something Amazing