CopBlock.org | The concept of the “peace officer” is a myth. Those so-called “peace officers” were, like today’s police, enforcing arbitrary legislation, operating based on the claimed legal right to do things wrong for you or me, and subsisting on stolen money.

The failings of the modern police institution are apparent.

Certainly, the paramilitarized police employee of today is a distant cry from the image of the approachable peace officer of yesteryear.

Many have wondered aloud: What happened to the peace officers?

And some have, with a bit of nostalgia, clamored for a return to the time when police were helpful, not harmful.

But such a perspective assumes that there was in fact a time when peace officers existed.

In truth, the concept of “peace officers” is a myth.

Those so-called peace officers were, like today’s police, enforcing arbitrary legislation, operating based on the claimed legal right to do things wrong for you or me, and subsisting on stolen money.

Thus, the police state we are confronted with is not a surprise – it is the natural consequence of legalized double standards being accepted during those bygone eras.

>> So long as society is founded on injustice, the function of the laws will be to defend and sustain injustice. – Anatole France 1894

To be clear – the image of the peace officer is just that – an image. There were still rights-violations happening at the hands of police employees, but they were largely constrained to subsets of the population – to individuals who, a few generations prior, were legally said to be property.

For example, in the late 19th century and early 20th century, legislation was passed in many places that regulated the ownership of certain firearms. Yet for decades, the only people harassed and caged by the enforcers of the legislation were those with more melanin in their skin. It was simply a legalized way to disarm those so long oppressed.

But now, after decades of further entrenchment of the statist quo, that legislation is enforced equally – equally against those who do not have a special badge that is, making clear the assumed position of those who call themselves the rulers.

The motivations of those within the injustice system – then, as now – was not justice and equality, but the maintenance and growth of their perceived authority.

So really, nothing has changed. There was no era of peace officers who mysteriously transformed into something more onerous. Certainly, the list of actions said to make you a criminal has grown. But all monopolies behave this way over time – they’re incentivized to grow in size and scope.

Thus the systemic rights-violations by police employees now cuts across all perceived demographics, which negatively impacts more of us. So much so, that everyone from children to soccer moms know to film the police.

What can we do beyond filming?

First – reject the fable of the peace officer. When a monopoly on the use of force is claimed and granted, humans are divided into masters and slaves. There are no exceptions to this rule.

Second – stop supporting the police apparatus. By relying on them, calling them, and funding them, you grant their claimed legitimacy. Will disputes and evil people still exist? Without question. But seek to address them yourself or with other, good folks in your community. If needed, use apps like Peacekeeper to solve local disputes and emergencies.

And third – disassociate from those whom you know to be in the employ of police outfits. Don’t rent to them, sell them your goods or services, or invite them to your family reunion. Ostracism is a powerful mechanism that can incentivize wrong-doers to act responsibility.

>> I do not ask that you place hands upon the tyrant to topple him over, but simply that you no longer support him. – Etienne de la Boetie 1552

Giving Your Attention →
← Rearing Without Religion 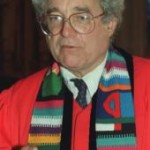 You can't duck the issue; it's a moral one.William Sloane Coffin … (next quote)

Why Do We Exchange Things?

The Enemy At Home