Font
I Don’t Have Rights; Nor Do I Want Any →
← What is Social Justice?

AngryHateMusic | Philosophy is not public. It cannot be enjoyed while being ignorant of it. Philosophy is private. The only way to have it, is to learn it yourself. A few cannot raise the many, and the virtues of philosophy are not as obvious as science.

Looking at history, and looking at war, I see something puzzling. About the only thing that changes is the level of technology. We build bigger and bigger machines to fling metal and fire at one another, in order to transfer land and resources to psychopaths and government. But it amazes me how stupid war is, and yet we have the technical ability to build missiles guided from space, nuclear bombs, and atomic submarines. Still we are stupid enough to choose to build these things and to use them. Of course, usually the people building these things are not the same people who use them.

That’s how Science is as a whole. Even though societies have advanced in the sciences. In the humanities they have basically flat-lined. The world still has slaves. Still has human trafficking, sex slavery, still pollutes vast portions of the planet, still has ethnic cleansing, and of course, war…

For everything we have gained in science, we are severely lacking in philosophy. The problem with philosophy is not in the subject itself, or in its usefulness. The disadvantage of philosophy is that it doesn’t mesh with economics. It’s not something you can trade so it doesn’t have the market forces behind it that science has. Science is public via the market. If there is a new invention, it can benefit everyone. It can benefit everyone without everyone needing to understand it. The majority of people who use the fruits of science can be wholly ignorant of the science itself. You don’t have to reach the level of understanding required to make a technology, to use that same technology.

So the virtues of science are well understood and not questioned. Everyone can see the usefulness of someone figuring out scientific matters, because if nothing else new inventions in disease prevention and technical gizmo’s for communication and transportation (which are the by-products of scientific knowledge and an economy) can benefit everyone.

But have these advancements made us happier? It seems like they should, but they haven’t. The joy of new invention is short lived. People understand or experience happiness relative to their own past experiences, that is: they contrast their present experiences with what they are used to and what they know. To make a scientific play on words, people do not feel velocity, only acceleration.

Todays generation, despite having more technical gizmo’s, have higher rates of depression, suicide, divorce, and self-sacrificing behavior than in the past. People in their 30’s and older today can remember life prior to cell phones, the Internet, and high graphic video games. And they were just fine without them.

The efficiencies of time saving inventions is short lived too. Because once enough people have them the level of competition and expected output from having these devices increases to the point where they do not save more time than before, because demands increase alongside them. For example; certainly a cell phone makes it quicker to reach one another, but in doing so jobs simply demand that people work faster than before and base their expected output on the assumption that the worker has a cell phone and every other widget.

Socially, a person is available when they are available, so having 24-hour contact doesn’t actually increase a persons availability. Plus one has to compete with everyone else who has a cell phone who might also be trying to contact the same person. A person might even be stuck working on vacation because of the convenience of contact. People may be getting even more isolated by the virtual world, and easy contact, than without it. This is because contact is no longer face-to-face. Sure information is exchanged but maybe conversation isn’t just about exchanging information. Maybe it has its own worth beyond communication.

Philosophy is not public. It cannot be enjoyed while being ignorant of it. Philosophy is private. The only way to have it, is to learn it yourself. A few cannot raise the many, and the virtues of philosophy are not as obvious as science. For one, science began as philosophy, as did many other fields. Philosophy tackles questions that do not have definite or concrete answers. They expand the borders of our knowledge. As answers start to become more and more accepted as absolute, such as in empirical science, it’s no longer categorized as philosophy, but that’s where it begins.

Economic theory, psychology, politics, these are philosophies, but they all suffer from science envy. Psychology calls itself “a soft science”. Government philosophy tries to call itself “political science”. And economic philosophies which have become economic dogma, and present themselves as theories rather than philosophy, they are not scientific and they are not theories.

If you want to use rocketry to explore space, you can. Or, if you want to blow up cities you can do that too. The burden is upon Man to decide what he does with the knowledge. That rocketry works and how is the only concern of science. Science is neutral, philosophy is not. Philosophy takes a stance, in morality, in justice, in virtue, in what we do. The market demands a high level of science. The factory like school system is quite lop-sided in its approach on this matter. Philosophy is not even a course until college, and only if people choose it.

It’s not even about giving people answers. It’s about the process used to derive the answers. It’s about learning how to think, not just what to think. If people knew more about logical fallacies and rhetoric, perhaps they wouldn’t be the victims of it so often from Politicians and Preachers and The Press. Perhaps fewer people would have a mid-life crisis if they had thought about how they wanted to live more in their youth instead of taking the consumerism auto-pilot approach given to them by commercialism.

Given the rapid rise in technology we should have far more leisure time then ever before. And yet, currently people are spending half their lives preparing for (through education, mostly largely divorced from their practical lives) another layer of education where they are just judged by tests to get into even higher level cesspool after another, one after another, so they can have the privilege of getting a job where they will work in the service of others, often against their own interests and personal desires so they may rent the remaining hours of their life to do what they actually want to do. Assuming they pull in enough income to pay for all their biological necessities first.. And in most places if you do not have a cell phone, a car, and a list of other costly items, you will not be able to realistically compete for jobs which allow you to have the money to have your necessities and eventually free time.

Does it have to be this way? Do we all need to be working? Is constant growth and production actually necessary, healthy, or good? I’m not going to answer these questions I just want you to think about them and discuss it.

Technologies are not good or bad. How we use technology is what matters. Not everything that is valuable in society is something that can be sold. Not everything we need as Humans is tangible. A constant in history, which though it cannot be concretely measured like counting beans, it still can be measured, is how; talking with one another and building friendships is a source of real fulfillment and happiness that doesn’t fade. We can change the background and the containers, the glasses and the plates and things but, sharing meals and talking (and perhaps using recreational drugs like alcohol) has been a social activity around the world practiced since ancient times. And you can dice that up into how companionship is evolutionarily beneficial to survival if you want, but acknowledging how we behave and what makes us feel fulfilled is important. As social Animals shouldn’t we add a little more social activities to our educational system?

Socializing can’t be prevented. Students are going to do it, but they are forced to do it in the intervals between classes where they are allotted time to eat after getting food in an assembly line. Why not in the classroom? Certainly social activities could be incorporated in the learning materials? The goal after all is for everyone to know it, isn’t it? But instead we have a rigid competition. Don’t talk to each other! Don’t look at each other! Don’t look at so-and-sos work! Sit down, shut up, and listen!!!

Children in really bad classes are often sitting silently, in rows, for hours, basically just temporarily memorizing stuff for a future test. Often the knowledge has no real application in their lives and never will. Is that really the best way to consume the bulk of about 17 – 20 years of a persons life?

In the very beginning people learn applicable skills. They learn to read and write, use utensils, they understand real world math which will be used in economic exchange. A dab of this and that. But at a certain point it just becomes academic minutia. They learn the same history three or four times in a row, three or four years in a row. They read fictional stories in “English” class or whatever their native language is, which is usually nothing more than the states indoctrination and little else. Why do we put so many minds in stagnation like this?

Just a thought I had, we are so lopsided in our humanities versus science and we desperately need more philosophy, and more thinking. We have far to much following and far to much consumption for the sake of consumption. I really think that happiness is vitally important. It’s a vitally important subject and it should be studied as vigorously as other academic subjects. And that’s just one of the many questions tackled in philosophy. What is happiness, what is virtue, etc…

These questions are not given the analysis and time that they deserve, and I think we all suffer from that.

I Don’t Have Rights; Nor Do I Want Any →
← What is Social Justice? 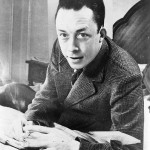 The only way to deal with an unfree world is to become so absolutely free that your very existence is an act of rebellion.Albert Camus … (next quote)

You Can’t Feed Your Arms To A Predator…