Font
An Enquiry Concerning the Principles of Morals →
← The Primer Fields

The Urge To ‘Do Something’

Strike-The-Root.com | It’s virtually the mantra of the statist government-believers – those of the Left, Right, and Center – whenever there’s a perceived “crisis.” A mass shooting. Unemployment. A display of racism or gender-bias. A tax-financed school system that fails to actually educate (though why such should baffle anyone is beyond me). At once come the hysterical cries that “we” need to “do something” – which usually means pass a new law, create more rules, raise taxes, and have just a little more inner contempt for that dangerous, dangerous concept called Freedom. The end result, of course, is always that very little of a positive nature changes – except that the tax burden gets heavier, police become more intrusive and abusive, the paranoia of society increases on all sides and levels, and the world becomes just a little worse of a place to live in. But those who feel they “took action” feel strangely relieved and vindicated, as if something noteworthy and of great import were accomplished.

Even among many of those who customarily decry the actions of bureaucrats, there is still insistence that “we” mustn’t allow “the other side to win.” It’s important to vote, they say, otherwise you’re just “doing nothing” to stop the ever-rising tide of government expansion, intrusion, and aggression. The socialist government-lovers will continue to vote, and so “we” must stop them.

I don’t believe I really need to spell out the complete inconsistency in that kind of non-logic, so instead, I’ll just jump forward to say that not only is non-voting better than “doing something,” it’s also not “doing nothing” – especially not when combined with other actions aimed at delegitimizing, defunding, removing support for, and ultimately abolishing government.

No, as I’ve spelled out heretofore, non-voting alone will not eliminate government. It might be argued that voting, at least on occasion, can provide some short-term, temporary relief from certain actions of those in government. Even Lysander Spooner, in his infamous essay, “No Treason: The Constitution of No Authority,” had something to say about what we might call “defensive” voting: “As taxation is made compulsory on all, whether they vote or not, a large proportion of those who vote, no doubt do so to prevent their own money being used against themselves; when, in fact, they would have gladly abstained from voting, if they could thereby have saved themselves from taxation alone, to say nothing of being saved from all the other usurpations and tyrannies of the government.”

But if we are to form any kind of a consistent, long-term vision of achieving true liberty, it is wildly inconsistent and counterproductive to include voting as part of that strategy. We must of necessity look elsewhere.

We live in a society which, ironically, because of the abundance and prosperity made possible in bygone decades and generations due to even a relative absence of governmental intrusion, is accustomed to instant solutions and gratification: Fast food, ATMs, high-speed internet browsing, movies-on-demand, swipe the plastic card and make the purchase. We are currently still reaping yesteryear’s crops, though if government continues, it’s beyond any rational dispute that this state of affairs will most certainly not for much longer. However that, most members of our culture at least implicitly believe that politics functions in a similar capacity: Enter the voting booth every couple of years and pull the right levers and everything will come out all right. Sounds more like a toilet stall to me.

There are more than likely any number of things that need to be done in order for humanity to realize true liberty, but it might be fair to say – at least at this juncture – that there are even more things that we need to stop doing. Like voting. Believing that taxes are some kind of an essential element of a stable society, and being afraid of finding ways to avoid paying them. Working government jobs, or accepting government contracts if you operate a business. Associating with government employees on any kind of a social basis. Using government money to complete transactions. Calling the police if there’s a problem (which, these days usually just creates another problem).

In other words, what I’m driving at here is that, when attempting to get government off our backs – once and for all – less is often more. Standing down, so to speak, or non-engaging, often accomplishes more of a productive (or, at the very least, not nonproductive) nature in terms of anything beneficent to the cause of libertarianism.

So the next time something seems to spur you self-righteously into knee-jerk action, consider whether what you have in mind is helpful or harmful.

An Enquiry Concerning the Principles of Morals →
← The Primer Fields 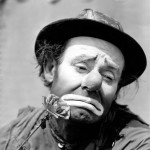 By laughing at me, the audience really laughs at themselves, and realizing they have done this gives them sort of a spiritual second wind for going back into the battles of life.Emmett Kelly … (next quote)

A Revolution Is Not The Answer

You’re Not the Boss of Me!