Font
An Anarchist Perspective on Government →
← Slavery: A Global Investigation

The Minimum Wage Protects the Rich

FFF.org | The moral issue is this: Why shouldn’t poor, inner-city, black teenagers have the unfettered right to freely compete against well-to-do white teenagers (and adults) by offering to work in any business or enterprise at any wage they’re willing to work for, even if it is less than the mandated minimum?

Liberals respond: That would be unfair because then they would be working at an extremely low wage.

But that position, obviously, is ridiculous because what liberals end up doing with their minimum-wage law is prohibit the poor, inner-city black teenager from working at all.

Which is better: working at $1 an hour and learning a trade and a work ethic and watching how a business is run or being prohibited from working at all?

But there is another important factor involved here. Not only does the minimum wage lock poor, inner-city black teenagers out of the labor market as employees, it also prevents them from opening up businesses to compete against the already-established, well-to-do businesses run by white people and others.

In other words, the minimum wage serves as a government-granted privilege to already established businesses, protecting them from competition, including from poor, inner-city black teenagers.

How does this privilege work? In the absence of the minimum wage, black teenagers would be free to establish their own businesses, hiring people in the neighborhood at, say, $1 an hour. That would mean that their start-up costs would be much lower than if they were required to pay their workers $7 an hour. Thus, what the minimum wage does is impose artificially high labor costs that preclude new, upstart, competitive businesses from coming into existence to compete against the established firms.

Consider, for example, a big, long-established landscaping service that charges its clients extremely high rates for lawn-maintenance services. An 18-year-old inner-city, black teenager who has been mowing lawns all his life decides that he can provide a better lawn-maintenance service at a lower cost. He decides to open his own business. Lacking much capital, he offers a bunch of unemployed 13-year-old black kids from the ghetto $1 an hour to work for his company as lawn-maintenance workers. The kids are eager to go to work at that wage because they get to learn a skill, earn a bit of extra money, and, most important, get to see how a business operates from the ground up.

The business comes into existence and is thriving. The new landscaping company is charging half what the established company is charging and still making a nice profit. Attracted by the lower price and excellent service, many customers of the old firm are gravitating to the new firm.

So, what happens? The president of the old firm files a complaint with the state, complaining that the new firm isn’t paying its workers the minimum wage. The state investigates and confirms that the new firm is violating the state’s minimum-wage law. “This is outrageous,” scream the bureaucrats. “You’re exploiting those 13-year-olds,” liberals cry. “Pay them the minimum wage!”

But the newly established business cannot afford to pay the mandated minimum. It shuts down its operations. The customers go back to the established firm. The black teenagers start pushing drugs, robbing people, or go on the dole. What else can they do, when the state has effectively prevented them from sustaining their lives through legitimate labor?

Meanwhile, liberals continue to remind everyone about how much they love the poor, needy, and disadvantaged, as they call for even more increases in the minimum wage.

An Anarchist Perspective on Government →
← Slavery: A Global Investigation 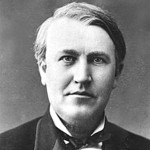 There ain’t no rules around here! We’re trying to accomplish something.Thomas Alva Edison … (next quote)

A Christmas Gift for My Daughter

A Reason Not To Vote