Font
Why Can’t Chuck Get His Business Off the Ground? →
← 10 Cannabis Studies the Government Wished It Had Never Funded

PeteEyre.com | On June 5th, 1989 one individual had enough of the oppression he and others had long-endured from one of the biggest and most ruthless gangs ever to exist. Left with few other options after decades of rights-usurpations, the man stood up to the aggressors and very literally put his life on the line by standing in front of a column of tanks. Though never identified with absolute certainty, he became known as The Tank Man. 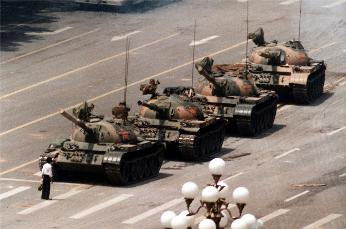 Three weeks ago I got a tattoo depicting the incident to pay tribute to the actions of The Tank Man and to remind myself of the power of ideas. The bad ideas of collectivism have terrible impacts – war, famine and the denial of individual rights, whereas the good ideas of individualism have positive impacts – peace, wealth creation and respect of negative rights. The Tank Man’s action – captured by Jeff Widener from a hotel balcony half a mile away – became one of the most-recognizable images from the 20th Century. That is unless you happen to be born within the arbitrary political boundaries of the “People’s Republic of China” where the event happened, as government censors there have all but erased the incident from history books.

After posting a picture of my tat to Facebook my bud Kevin Eric commented:

I met this girl from China the other day she’s 24 I showed her this pic she had no idea what it was…We showed her the vid and she called her mom in China all like freaking out becauase she hadn’t seen it and the gov’t was lying to them and her mom was all like don’t believe that stuff it never happened.

Just how did this event transpire? How did it get to this?

In the seven weeks that preceded The Tank Man’s actions hundreds of thousands of people had rallied for more freedom in nearby Tiananmen Square and elsewhere around China. Their peaceful demonstrations were met with violence – the only tactic known by those who claim the “legitimate” right to use force (government). External media placed the death toll from the crackdown in the thousands, yet the gang – the Communist Party of China – claims that there were no deaths within the square. Further, according to Wikipedia:

Chinese authorities summarily tried and executed many of the workers they arrested in Beijing. In contrast, the students – many of whom came from relatively affluent backgrounds and were well-connected – received much lighter sentences. Wang Dan, the student leader who topped the most wanted list, spent seven years in prison.

In late November, 2007 I was able to hear Dan speak at an event sponsored by the Mercatus Center. There, he gave an overview of the event and how he had rather spontaneously assumed his role before touching on the time he spent in Liaoning Prison for allegedly “conspiring against the Chinese Communist Party”. During the Q&A I asked him about his views on the climate of freedom in China today – he responded with a mixed outlook.

But, to provide a more-foundational answer to the question – Just how did this event transpire? – It was only because people granted authority to these criminals – paid taxes and obeyed arbitrary rights-violating man-made dictates.

Here in America we don’t yet have tanks rolling down the streets (unless you were at Waco in 1993) but don’t think such actions are impossible. All governments are based on violence – their natural tendency is to grow, and the U.S. government is no exception.

If we don’t stand against these criminals today it’ll be more-difficult to do so tomorrow.

* R.J. Rummel’s work on democide, which puts the death toll in China from the government at 77 million.
* ‘The Tank Man‘ by FRONTLINE on PBS
* Voluntaryism on Wikipedia
* Civil Disobedience on Wikipedia
* Public Choice Theory on Wikipedia
* Connect with other liberty-lovers on Fr33Agents.net
* Move to the ’shire as part of the Free State Project
* ‘Tattoos for Liberty‘ video which shows Leah Patrick giving me The Tank Man tat

Why Can’t Chuck Get His Business Off the Ground? →
← 10 Cannabis Studies the Government Wished It Had Never Funded

I have never seen, to my knowledge, a man, woman, or child who was in favor of producing a perfect equality, social and political, between negroes and white men.Abraham Lincoln
Senate campaign debate with Stephen Douglas. (18 September 1858) … (next quote)

Self-Immolated In Protest Of The “Justice” System

But Who Will Build The Roads? Not The Government…