Font
I Am Wounded Daily →
← Jurisdiction!

FreedomFeens.com | Oh what a day. On this holiest of holidays, Americans young and old; alive and dead; set their theological differences apart to engage in the sacrament of voting. The religion of the State brings so many together from every race, gender, sexual orientation, theological belief and even the two major political parties to do their civic duty. War be with you… and also with you.

Similar to the Catholic celebration of Ash Wednesday, the members of the congregation have adorned themselves with the mark of their faith. Instead of ash formed in the shape of a cross on the forehead, there is a sticker on the shirt that says, “I voted.” Vote Tuesday may have started with a prayer, pledging allegiance to the idol and to the State itself. Unlike theological beliefs, idolatry is permissible in the religion of the State. In fact, idols are encouraged… the more the merrier as they can only pay homage to this great Lord. And as the people vote for other people’s money and decide other people’s rights, they silently pray, “Lord hear our prayer.”

The ministers and congregants have gone forth to bear witness and spread the gospel of the State. They have reminded us that it is our duty to worship and serve our Lord, the State. It is our duty to partake the sacrament of voting, early and often. They told us of the martyrs that gave their lives for our religious freedom to worship the State. When praying to the State, make sure you are on your knees.

But alas, not all are so devout. My sin is heresy as I have not accepted the State as my Lord and Savior. I have chosen, “Thou shalt not lie, kill, steal, or covet” as my belief. It is the Non-Aggression Principle. I have played no part in violating another person’s life, liberty, or property, I voted NO, and I did it from home. The mark of the beast does not appear on my shirt.

The false prophets commanded me to worship the State and take part in the sacrament and I refused. I testified to the righteousness of individual rights and liberty. I was laughed at and ridiculed. I told them of what they were doing and how it was wrong. “May a Predator Angel from above strike you down with a Hellfire missile!” was the response. My other sin appears to be blasphemy.

This is my cross to bear.

I Am Wounded Daily →
← Jurisdiction! 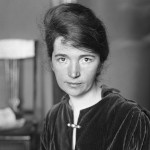 But for my view, I believe that there should be no more babies.Margaret Sanger
Founder of the Planned Parenthood Federation of America in an interview with John Parsons, 1947 … (next quote)