OutsideTheRealityMachine | Whether he is sitting on top of a mountain of his own imagination or swimming in the depths of undersea caverns of his own invented time, he proliferates. He builds space and time and then sometimes destroys them. He takes pieces of rubble and assembles them into new entities.

He robs history if he decides to, and then he transforms it. He holds universes in his hand, and then he makes them disappear.

The artist has always been outside society. It makes no decisive impression on him, because it is founded on rules of organization. The artist shows people, if they can see it, how foolish organizations are, because he creates something beyond The Group.

He is leading edge of consciousness, beyond the clap-trap of religions and governments and spiritual systems and homilies. He knows systems are closed, and he is dealing in what is open.

The sun comes up and the sun goes down, but the artist can make the sun appear and disappear a hundred times in one day, if he wants to.

While everyone else is trying to manufacture connections to the group, under the banner of a false sense of community, the artist is going in the opposite direction.

Philip K Dick: “Insanity—to have to construct a picture of one’s life, by making inquiries of others.” 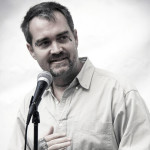 The cynic is the tyrant's best friend.Ken O' Keefe … (next quote)