Strike-The-Root.com | “If you find a chance to vanish into some wilderness out of their reach, do so…; build a productive life of your own with those who accept your moral code and are willing to struggle for a human existence.” ~ Galt’s speech, Atlas Shrugged, Ayn Rand, 1957.

Rand’s advice resonated with me when I first read it in 1965. It still does. I never did much about it though, partly because I already knew about the manual labor involved; ten years of farm labor while growing up cured me of any illusions about that. Still, I liked the idea, and as western civilization swirls around the drain today, survival looks more and more like seeking such a refuge.

Thinking about that as a real option is difficult. We are surrounded by distractions. The daily news is full of nonsense treated with gravity, while important events are ignored or lied about. Even with the Internet, finding the truth takes time that few people have available. Mainstream media cannot be trusted at all; they reliably trumpet the script handed to them. Then there are dozens of special interests clamoring for attention.

I have no idea what Rand thought she meant by wilderness. Uninhabited? Maybe. North America has a great deal of uninhabited and uncultivated land, much of it designated wilderness by governments. Squatting on this land will not be safe until government policing systems totally break down. Buying, leasing, or renting arable land may be an option if we possess something of value to trade for it. At the moment that would be the fiat dollar, but at some point in the future it might be something else, like manual labor.

Americans and Western Europeans are not accustomed to thinking of their food and fuel in terms of manual labor; we think in terms of machines doing that kind of work. Machines do not run on political hot air, however, they require engines powered by something–steam, gasoline, kerosene (diesel), creosote, coal–something. What if that something is not there? I believe the time has come to start thinking about that.

No matter where we live, we should be accumulating reliable hand tools against the day that we might need them. There are several categories of tools to consider:

To see what one man can do with the right tools, read One Man’s Wilderness. Note that he did have supplies flown in, so he was not entirely self-sufficient.

I don’t believe that a lone individual or even a family would do very well in survival conditions. I have read the unpublished diary of a Dakota homesteader in 1900 and the one point that’s clear is that he relied on friends and neighbors who lived in a twenty-mile radius of his farm for help. None of them had any money and all of them were farmers, but some were more skilled at some things than others, so they traded goods or labor as the situation arose.

One scenario that appeals to me is to acquire an old rural RV park that sits on at least twenty acres of arable land with good rainfall. I would plant a cover crop of rye and vetch and leave it alone until need be, and then invite family and friends to join me – bring your own RV. Knowing who owns what would be essential, but I believe that a cluster of twenty or so people working with similar purpose would enhance the odds of survival.

As fraud rains down on us from the District of Criminals and the financial noose tightens on them, and us, I think it’s time to take John Galt’s advice seriously. Think refuge. 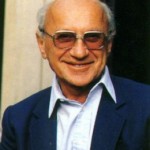 The only way that has ever been discovered to have a lot of people cooperate together voluntarily is through the free market. And that's why it's so essential to preserving individual freedom.Milton Friedman … (next quote)