Strike-The-Root | Along with thousands of other St. Louis Countians, I recently received in the mail a document entitled “St. Louis County Missouri Real Property Tax Bill.” It was anonymous, but presumably from the “Collector of Revenue.” He—or she–demands thousands of dollars. Of all the taxes with which we are burdened, the property tax may be the most onerous, although the race would be a close one, to be sure.

It didn’t come as a surprise, but as a disappointment. What was disappointing was the fact that, although this “Collector” was demanding that we send him thousands, there was not, in his demand, a single word to justify it. Obviously this official is so accustomed to being obeyed without question that he does not find it necessary to tell his victims why they must send him, in the aggregate, millions of dollars. So sad! So I decided to ask him.

To date, I have not received a reply, but when I do, it will almost certainly say that his demand is authorized by some statute. He will probably cite it. And that’s that, as far as he is concerned. Unfortunately, for most of his subjects, that answer will satisfy. After all, it’s the law! And “law-abiding” is the greatest of virtues among citizens, isn’t it?

But wait! The demand is being made by a political subdivision of the state of Missouri. The law authorizing it will be found in the revised statutes of the state of Missouri. The “Collector,” in other words, is a member of the same gang that wrote the law. So his demand, in its simplest–and truest–terms, is this: “You have to send us the money because we say you do, and we further authorize ourselves to punish you if you don’t.”

Defenders of this preposterous position may point to the “tax distribution” table included with the demand. It lists the various agencies of the state that will receive the loot. They may offer as justification for demanding my money the many worthwhile (!?) activities it will support. (It’s easy to be generous with other people’s money. By far the biggest beneficiary is the local public school district, which I would never support voluntarily, and which undoubtedly presents information to the students that I would reject, forcing me to subsidize the propagation of ideas that I oppose.) Ah, well–mustn’t be judgmental. Mine is not to question why! But, come to think of it, why not?

We are supposed to believe, I guess, that if our property is taken from us against our will and used for some good purpose (good as defined by the taker), we shouldn’t complain. And if the taker (in ordinary terms, a thief) is a member of a gang that has given him due authority to do the taking, by solemnly voting upon it and inscribing it in books, then not only is he not a thief, but a dedicated public servant, accomplishing good things–good, again, as he defines it. How dare we question him! Are we so naïve as to believe that our property is actually OURS? From each of us according to our ability, to the collector of revenue according to his demand.

In the past I have made inquiries of this “Collector,” asking him how he could assess my property in terms of “dollars,” when that term is not defined, and has no specific value assigned to it. His answer was unresponsive, but why not? He has the police, the sheriff, and the guns. Those who refuse his demands eventually have “their” homes taken from them. That is the only justification he need offer.

Docility is a desirable quality in sheep being herded to the shearer, not in people meekly submitting to a two-bit tyrant. A single person—or even a few dozen–may be unable to resist his demands without paying a terrible price. But to my mind, at least, he shouldn’t be allowed to continue his predation unchallenged, if only to force him to think about what he’s doing, and attempt to justify it. His gang, after all, is claiming a greater sovereignty over our lives and property than we have. But, alas, the sheep far outnumber the guard dogs. 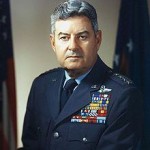 For us the only difference between peace and war is where we place our bombs.Curtis Emerson LeMay
World War II United States Air Force General … (next quote)

Facts? I Don’t Understand the Question

Copying Is Not Theft