Font
Where Did You Come From – Why Are You Here And Why Do You Vote? →
← The Prussian Connection To American Schooling

NoGov4Me.net | “A diabolical, irreverent, and even arrogant indictment of the mass delusion, democracy, and the blind faith in any other form of government. From now on, nonvoters have at their command an authoritative, logical retort to the hackneyed (but effective) propaganda, ‘If you don’t vote, you can’t complain!’ ”

Here is the mistake the authoritarian makes when he tries to justify voting to conjure up authority. He thinks he is delegating the right to rule himself when he votes, where-

Bob might be able to delegate ‘A,’ the specific right to rule himself (i.e., only Bob), in theory. Naturally, he would always have the right to take back his consent to be ruled, making that delegation null and void at Bob’s discretion, which makes even that an absurdity. However, that is not the same as delegating the general right to rule others (‘B’), with the resultant delegation (by voting) giving George the right to rule people that Bob has no right to rule. So, when Bob thinks he is delegating right ‘A,’ while actually attempting to delegate right ‘B,’ he is trying to delegate a right he does not have, which is impossible- and since everyone (including George) already has right ‘A,’ voting is really just a meaningless and superstitious cult ritual.

This brings up a particularly anti-human result of the statist’s philosophy. Do the murderers and rapists believe in an obligation to obey the “law”? Obviously not, since they disobey it. They only fear the consequences of getting caught. So only the generally good (albeit deluded) people really care if something is “law.” And since the good people would already support justified defensive force, the only thing the “law” changes is that otherwise good people then also start to support unjust force. I sometimes ask, “When the law is wrong, what should happen to those who disobey it?” The authoritarian tries to avoid answering, at first. He will say something irrelevant about writing to congress and changing the law (as if individual citizens could actually change what congress commands them to do. If the authoritarian respects the law so much, and congress’ right to create it, why would he disagree with it enough to want to change it in the first place?). When pressed, he will say the absurd thing, out of his conditioned belief in the inherent righteousness of the law. He will say, “They should suffer the consequences.” That is, they should be put in jail. Instead of pointing out how idiotic that is, I follow up with, “And what should happen to those who enforce such a wrong law?” They almost always say, “Nothing.”

So, from the authoritarian’s conditioned response we see in his philosophy the absurd result that people who do the right thing should be locked up, and people doing the wrong thing should run free- which is why that so often happens in politics.

To order from Trafford Publishing or your local bookseller, refer to: ISBN Number 1-55369-573-9

Where Did You Come From – Why Are You Here And Why Do You Vote? →
← The Prussian Connection To American Schooling 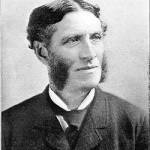 Home of lost causes, and forsaken beliefs, and unpopular names, and impossible loyalties!Matthew Arnold … (next quote)

The Philosophy of Non-Aggression