It amazes us to hear accounts of the valor that liberty arouses in the hearts of those who defend it; but who could believe reports of what goes on every day among the inhabitants of some countries, who could really believe that one man alone may mistreat a hundred thousand and deprive them of their liberty? Who would credit such a report if he merely heard it, without being present to witness the event? And if this condition occurred only in distant lands and were reported to us, which one among us would not assume the tale to be imagined or invented, and not really true? Obviously there is no need of fighting to overcome this single tyrant, for he is automatically defeated if the country refuses consent to its own enslavement: it is not necessary to deprive him of anything, but simply to give him nothing; there is no need that the country make an effort to do anything for itself provided it does nothing against itself. It is therefore the inhabitants themselves who permit, or, rather, bring about, their own subjection, since by ceasing to submit they would put an end to their servitude. A people enslaves itself, cuts its own throat, when, having a choice between being vassals and being free men, it deserts its liberties and takes on the yoke, gives consent to its own misery, or, rather, apparently welcomes it. If it cost the people anything to recover its freedom, I should not urge action to this end, although there is nothing a human should hold more dear than the restoration of his own natural right, to change himself from a beast of burden back to a man, so to speak.

“From all these indignities, such as the very beasts of the field would not endure, you can deliver yourselves if you try, not by taking action, but merely by willing to be free. Resolve to serve no more, and you are at once freed. I do not ask that you place hands upon the tyrant to topple him over, but simply that you support him no longer; then you will behold him, like a great Colossus whose pedestal has been pulled away, fall of his own weight and break into pieces?”

The above is from an essay La Boétie wrote in the early 1550s.
Entire essay in HTML format. 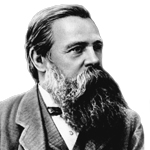 The state is nothing but an instrument of oppression of one class by another - no less so in a democratic republic than in a monarchy.Friedrich Engels
preface to Karl Marx, The Civil War in France, 1891 … (next quote)

War Is Good For Business