Font
Fuck You I Won’t Do What You Tell Me! →
← Property Rights Advocates Jailed for Life

FreedomInOurTime | The Patron Saint of narcotics task forces is 19th Century NYPD Officer Alexander “Clubber” Williams, who created an immensely lucrative fiefdom in a precinct ripe with vice and graft of every conceivable variety.

Clubber’s exuberant corruption made for good press copy, which was made even livelier by his compulsive quotability. “There is more law in the end of a policeman’s nightstick than in a decision of the Supreme Court,” he explained when he was criticized about his penchant for brutality. It was his proprietary brand of glib shamelessness that gave New York’s vice district its name: “All my life I have never had anything but chuck steak. Now I’m gonna get me some tenderloin.”

Like the contemporary drug warriors who are his institutional progeny, Williams knew that vice cannot be eradicated through state coercion — but that the “war” against it can be immensely profitable. As Professor Alfred W. McCoy of the University of Wisconsin-Madison points out, through drug prohibition, police act as “an informal regulator, controlling the volume of vice trading and setting the level of syndication”; this results in the creation of “powerful syndicates and a high volume of illicit activity.”

To see a splendid example of the process Dr. McCoy describes, all that is necessary is to cast our eyes to the south. Since 2006, the Mexican front of Washington’s drug war has claimed more than 40,000 lives. It has militarized that country’s law enforcement culture, thereby generating substantial profits for the corporate affiliates of Washington’s National Security State. The inflated profits resulting from prohibitionist policies have likewise been a boon to the banking sector, both in Mexico and globally. The cartels themselves are thriving, diversifying, and expanding their institutional reach both into the U.S. and Central America.

This symbiosis police agencies and the vice cartels they help create enriches criminal kingpins on both sides. The consequences of this cynical charade are often lethal for innocent people needlessly targeted by  State-licensed thugs armed with combat-grade weaponry and imbued with the scruples of Clubber Williams. Read Entire Article

Fuck You I Won’t Do What You Tell Me! →
← Property Rights Advocates Jailed for Life 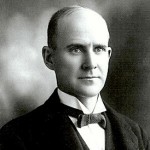 I would no more teach children military training than I would teach them arson, robbery or assassination.Eugene Victor Debs
1920 Presidential Candidate … (next quote)