Font
Let’s Start Over →
← When Should You Shoot A Cop

This ignorant-and-don’t-know-it is what makes the afflicted so dangerous. It’s as if they’re using arrogance to cover up stupidity.

Someone not knowing they’re ignorant is a fugue state – the person is in a deluded, half-asleep state but unaware of it. Many people know they’re not totally awake, because to be totally “awake” you’d have to know everything, to know what theologians call the Mind of God. For humans that is of course impossible.

People who understand their limitations and ignorance can be considered humble in the true sense of the word: not debasing yourself, just understanding how limited you are and how easy it is to make mistakes, which is inherent in being human.

The Greeks defined humility as Sophrosyne: “Know thyself,” and “Nothing in excess.” The more one “knows thyself” the less susceptible to propaganda he’ll be, and believing in Pure Good and Pure Evil always leads to excesses, because it invariably leads to dehumanizing “the Evil” as subhuman or nonhuman monsters.

On the other hand, people who are ignorant and don’t know it, and instead think they know what they are talking about (and what they are doing) can be considered arrogant, or afflicted with what the Greeks called Hubris, and the Bible, Pride.

These days, the term for Hubris or Biblical Pride is “narcissistic grandiosity.” It’s only been noticed in the last century that people with this affliction split things into “all-good” and “all-bad,” into pure good and pure evil.

I have met some of these people and the havoc they wreak is astonishing. All have certain traits in common. The main one is, “It’s always someone else’s fault, never mine.” Another is that they never notice the trouble they cause.

When you get groups of people together they always, under stress (say, an attack such as 9-11), regress to narcissistic infants. They, or their tribe, or their nation, is all-good, and those they define as their opponents or enemies are all-bad. And there the problems start.

Since no one, or no tribe or nation, is all-good, or perfect, whatever flaws they have are projected onto their opponents. The word for this is “scapegoating,” which comes from a practice by the ancient Hebrews in which they projected their sins onto a goat and then drove it into the wilderness, believing their sins would disappear.

An example not so long ago is when the perpetually confused George Bush referred to the Evil Ones who attacked us “for our goodness.” Then the “Evil Ones” returned the favor by calling the United States “the Great Satan.”

In politics everything is either good or evil, with no shades of grey (just as in politics people are never murdered – they are collateral damage, obstacles to be removed). When the belief in either-good-or-evil is wedded to the force and fraud inherent in politics, along with the infantile narcissism and simplistic thinking inherent in the Mob, it is no wonder politics has slaughtered more people than everything else in the world put together.

As deluded as an individual can be, groups – tribes, Mass Man, the Mob, whatever name you call them – are truly the problem. Read Entire Article

Let’s Start Over →
← When Should You Shoot A Cop 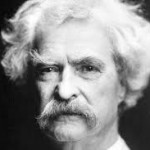 Censorship is telling a man he can't have a steak just because a baby can't chew it.Mark Twain … (next quote)