Marc Stevens | Below is a video about a tool I’ve been using for years and it has proven to be very effective. With the unsigned plea of guilty you’ll be able to get judges to commit three major fundamental fairness/due process violations at an arraignment in less than three minutes (this does not mean a ticket will always get kicked). This is evidence the courts are run by criminals. We can predict their behavior and replicate results regardless of political boundaries. A template is available for download here. Please make sure you edit it appropriately if you intend on using it.

By intending on pleading guilty and asking for evidence the prosecutor is supposed to have anyway, we expose the judge for the criminal they are when he/she predictably refuse to address the issue of jurisdiction. He/she will lie claiming jurisdiction is a trial issue. Instead of discussing the evidence, in anger they will enter a plea of not guilty over your objection. The judge may only enter a plea of not guilty when you refuse to plea or when a plea cannot be ascertained. The unsigned plea of guilty proves he’s lying and just covering up for the prosecutor, his/her accomplice.

The three errors, in addition to his lying about jurisdiction being a trial issue, are:

1. They lie that you are refusing to plea.

2. They assume jurisdiction and an essential element of the crime (applicability of the code) on behalf of the prosecutor.

3. They adamantly refuse to presume innocence.

When the psychopath screams at you to take your pretrial date and leave, you can object, point out his lies and put him in a real bind by asking: Can you please explain how you can assume the laws apply to me at the same time you’re supposed to presume innocence?

You won’t get an answer, probably just a threat of contempt. By contempt is meant you caught the judge being deliberately unfair and prejudicial to you and he has no defense other then threatening violence.

You can file a motion to disqualify the judge and vacate the plea using the three issues above and the fact he is lying about jurisdiction being a trial error. I’d use it as a basis for a complaint to the presiding judge, the judicial conduct commission, the supreme court and to the municipality’s insurance carrier.

If you do plan on using this in court, please let me know by email and calling into the show. http://marcstevens.net 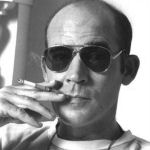 I don't want to go to my grave thinking hell spoke a different language.Hunter S. Thompson … (next quote)

Fascism Is as Fascism Does

One Anarchist’s Compressed Take On Justice