Mental Disorders Do Not Exist 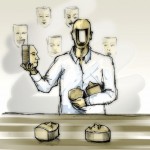 JonRappoport | To say that a person should have a right to consider himself mentally ill and to take a drug is one thing. This is an argument from the principle of individual freedom.

To say that such a person knows what he is doing by some objective standard is quite another thing.

Objectively speaking, mental illnesses and disorders do not exist.

Officially, all mental disorders are said to be chemical imbalances in the brain. Not just any imbalances, but specific ones. This is assertion is unproven. There is no evidence for it.

For example, for any of the 297 so-called mental disorders listed in the official publication of the American Psychiatric Association, there are no defining physical tests. No blood tests, no urine tests, no saliva tests, no laboratory tests of any kind.

This is a fact.

Kent State: 67 Shots That Pierced The Nation →
← Rulers vs. Leaders

Man is a wounded animal. His survival is astonishing. But his inability to heal his wounds is tragic.Roger W. Wescott … (next quote)

The Whole Problem (And Solution) In Two Minutes