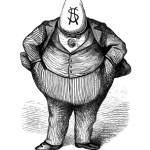 Flag.Blackened.net | OBJECTION #7: We grant that government has grown too big and with that growth has come admitted problems. But the answer lies in limiting the scope of the government, not eliminating it. We must make it our servant, not our master.

Somehow, somewhere, given a properly intelligent, some say, “objective” populace, the limited government buff suggests that it will be possible to create a machinery of government that will be controllable. Some of these little-government people may even go so far as to tell you how they will do it. But for most it is pure dream and hope out of which they build their plans for a utopian government.

In many instances this thing they want to create and call a limited government has no relationship and none of the essential characteristics, of any government that has ever existed. Generally, these model states have no power to tax and no absolute jurisdiction over a given territory. Without these essential powers there can be no government.

Government grows; that is its nature. Government is a power broker and an instrument for creating privilege. It must continually take on new functions in order to survive.

Not even the most holy Ayn Rand, followed as she might be with an army of the most objective of objectivists, can change this. It is a fact; it is history. It is the very nature of government.

Regardless of the lessons of history, these limited governmentalists assure us that it is within their power to create a limited government. And these are people who insist on calling anarchists “dreamers” and “utopians.” Read Entire Article

Nothing in the world is more dangerous than sincere ignorance and conscientious stupidity.Martin Luther King … (next quote)

Render Not: The Case Against Taxation

The Gun In The Room