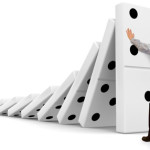 Flag.Blackened.net | Law relieves people of the need to find ways for peacefully negotiating solutions to their problems. It gives them a club with which they crush their neighbor into submission, and having the club, they use it. In the name of the “law” government can do all sorts of legally atrocious things and with confidence proclaim, “we had a right to do what we did.”

Because government exists, my college-age neighbors and I can struggle to dominate each other behind the shield of the policeman. We can deal with each other violently and righteously and that’s a fact that has far broader implications than statists wish to recognize.

Among those ignored consequences of state-administered coercion are these:

1) By using the policeman we can remain anonymous in our acts of violence against our neighbors. No one ever need know who “complained” to the police and, consequently, all the neighbors become suspect in the eyes of the one accused of violating the law. It’s hardly a way to foster strong community bonds.

2) By resorting to the government we mask the nature of coercion behind a shield of respectability. We have hidden from ourselves the genuine brutality of the act itself. We ignore the essential nature of the act, uncritically excusing it as something the government has a right to do simply because it is the government.

3) We give to the political machine a power and “right” to act under a set of moral guidelines quite unlike any that are applicable to the rest of the human community. Where it would be blatantly wrong for an individual to use force and violence against another, the wrongness of that violence is obscured when it is used by the state. For me to steal from my neighbors is wrong. Without exception I couldn’t find a neighbor who would disagree with me on that. But if I “authorize” a third party (the tax collector) to do my robbing for me, my neighbors become confused about their right to defend themselves from the thievery. This whole mental subservience makes us perfect targets for most anything the government wants to do to us. Read Entire Article

People who put forth analogies prior to definitions are usually up to something tricky.Stefan Molyneux … (next quote)