Font
The Prussian Connection To American Schooling →
← U.S. Out Of My Living Room

Getting Into The Mind Of The Jackboot 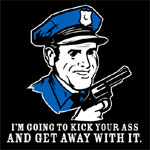 CopBlock.org | While it’s both easy and useful to point to police abuse and condemn it, often people give little thought to WHY it happens. It’s easy enough–and often accurate–to simply say, “That cop is a power-happy thug,” and leave it at that. But in reality, there is a lot more to it. To better understand how to stop it, we must better understand why it happens. And to better understand that, we must try to get into the mind of the jackboot, to see the world as he sees it. Let us observe the creature in action, and see if we can get inside its head.

There are many thousands of examples of police abuse I could use, but in this, my first article for CopBlock.org, I will start with something relatively benign. Every so often the local police set up a “sobriety checkpoint” on the main road in front of my house. They set up giant floodlights, and have police cars and traffic cones all over the place, and stop everyone coming through (sometimes in both directions, sometimes just in one direction). They ask the driver if he’s been drinking, maybe ask a few other things, shine a flashlight around the inside of the car a bit, and then usually let the guy go. And they do this for hours on end, late into the night.

Let’s consider just that as our example for now. My first question is, Would YOU do that? Would YOU have the gall to stop everyone driving down a street, to ask them if they’re behaving properly? I highly doubt it. So what makes the cops imagine that that’s a legitimate and noble thing to do, instead of recognizing it as being extremely obnoxious (not to mention unconstitutional)? In short, modern “law enforcers” view the world in a fundamentally different way than everyone else, and even different than most “law enforcers” viewed the world a few decades ago. (Once upon a time they were called “officers of the peace,” instead of “law enforcers.”)

While I don’t want this article to turn into an in-depth treatise on Constitutional law (Fourth Amendment, Fifth Amendment, etc.), it is worth pointing out the general mindset expressed in the Bill of Rights. In short, the idea was that, unless the agents of “government” already had “probable cause” to think you had done something nasty, they were supposed to leave you alone. They weren’t supposed to question someone, or search through their stuff, unless they already had reason to suspect someone of a crime. (And back then, a “crime” almost always meant injuring someone else, not just disobeying any one of the myriad of stupid, arbitrary rules the politicians keep spewing out.)

As it happens, the attitude expressed in the Bill of Rights more or less coincides with the rules for being a decent human being. For example, if you, as a mere civilian, saw someone trying to pry open a window of your neighbor’s house, I bet you’d feel justified confronting him, and asking him what he was doing. On the other hand, you wouldn’t stop everyone on the street to interrogate them, to see if they had done, or were planning on doing, anything you don’t approve of.

What would have to happen for you to think that it was okay for you to randomly stop, interrogate and search people at random (as is now commonly done at airports, “sobriety checkpoints,” “border checkpoints,” and so on)? In short, you would have to stop viewing others as your fellow human beings, and start viewing them as your rightful subjects, and viewing yourself as their rightful master. After all, a slave owner doesn’t hesitate to interrogate, search, or otherwise accost his slaves–which he views as his personal property.

That is why modern “law enforcers” act as they do. They do not view themselves as mere humans whose job it is to protect and serve other humans. They view themselves as the agents of the master (“government”), and they view you, and everyone else, as the property of the master. That is why they imagine themselves to have the right to stop you, detain you, interrogate you, search you, and pretty much do whatever they want to you, and if you ever resist, or even show “attitude,” they believe they have the right to taser you, assault you, and cage you, maybe even kill you. After all, they work for the masters, and you are the slaves. And as long as they view the world that way, you can expect them to keep behaving that way.

In upcoming articles, we will be looking at various examples of tyranny, not just so we can get righteously indignant about them (though we can do that, too), but so we can better understand how it is that the perpetrators of injustice can imagine such actions to be noble and legitimate. Remember, cops all start out as mere human beings. Maybe we can help a few of them to revert back to being human.

The Prussian Connection To American Schooling →
← U.S. Out Of My Living Room 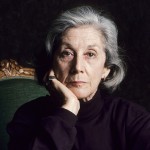 Truth isn't always beauty, but the hunger for it is.Nadine Gordimer … (next quote)

Death by Pedagogy: A Teacher’s Polemic Against Institutionalized Learning