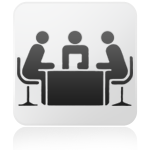 NotBeingGoverned.com | Advocates of “limited government” contend that government is necessary to maintain social order because disputes could never be satisfactorily settled without a single, final court of appeal for everyone and without the force of legal rules to compel disputants to submit to that court and to abide by its decision(s). They also seem to feel that government officials and judges are somehow more impartial than other men because they are set apart from ordinary market relations and, therefore, have no vested interests to interfere with their judgments.

It is interesting to note that the advocates of government see initiated force (the legal force of government) as the only solution to social disputes. According to them, if everyone in society were not forced to use the same court system, and particularly the same final court of appeal, disputes would be insoluble. Apparently it doesn’t occur to them that disputing parties are capable of freely choosing their own arbiters, including the final arbiter, and that this final arbiter wouldn’t need to be the same agency for all disputes which occur in the society. They have not realized that disputants would, in fact, be far better off if they could choose among competing arbitration agencies so that they could reap the benefits of competition and specialization. It should be obvious that a court system which has a monopoly guaranteed by the force of statutory law will not give as good quality service as will free-market arbitration agencies which must compete for their customers. Also, a multiplicity of agencies facilitates specialization, so that people with a dispute in some specialized field can hire arbitration by experts in that field . . . instead of being compelled to submit to the judgment of men who have little or no background in the matter.

But, the government advocates argue, there must be an agency of legal force to compel disputants (particularly those who are negligent or dishonest) to submit to arbitration and abide by the decision of the arbiter, or the whole arbitration process would be futile. It is true that the whole process would be meaningless if one or both disputants could avoid arbitration or ignore the decision of the arbiter. But it doesn’t follow that an institution of initiated force is necessary to compel the disputants to treat the arbitration as binding. The principle of rational self-interest, on which the whole free-market system is built, would accomplish this end quite effectively. Men who contract to abide by the decision of a neutral arbiter and then break that contract are obviously unreliable and too risky to do business with. Honest men, acting in their rational self-interest, would check the records of those they did business with and would avoid having any dealings with such individuals. This kind of informal business boycott would be extremely effective in a governmentless society where a man could acquire nothing except what he could produce himself or get in trade with others.

By Morris and Linda Tannehill

In more and more cases . . . politics and politicians not only contribute to the problem. They are the problem.John Shuttleworth
The Mother Earth News. … (next quote)

Who Killed The Electric Street Car?