What Is the Foundation Of Your Economic Beliefs? 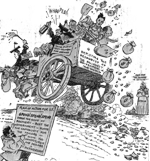 RealClearMarkets.com | Would you ever use the ballot box to force others to practice your religion or make them pay to build you a church? Why do you find it easy to do this with your economic beliefs, compelling others to foot the bill for the public policies you promote?

Do you believe that wealth is prima facie evidence of thievery? Of privilege? Do you think wealth can only be created off the backs of the poor? Is there a fixed amount of wealth in the world for all to share? If so, where did it come from and how has mankind been getting richer for the past 200 years? And if the poor wish to escape exploitation by the rich, why do they keep sneaking in to our country rather than out?

Do you admire highly paid sports figures yet disdain highly compensated business executives? Why? Does it matter whether the shareholders in the companies that employ these executives feel they are getting their money’s worth? And if you’re not a shareholder, what makes this issue your concern?

Is poverty an absolute indicator of worthiness? Do you believe the poor bear any responsibility for changing their condition? If not, whose responsibility is it and why? Should the poor be held accountable if they don’t make efforts to help themselves? Who should hold them accountable and how?

If a poor person becomes rich through hard work then resists handing his money over for the benefit of the poor, is he a traitor to his class? Should he be treated differently than someone who inherits great wealth? How about someone who wins the lottery? Why?

Does every poor person have a moral claim on every rich person regardless of how they got rich or poor? Where does this claim come from? Are claims limited to people living in the same country or do they extend to all humanity? Why? Is it the job of government to mediate these claims? If you believe highly progressive taxation and expansive government entitlements are necessary to reduce economic inequality, does it matter to you if the attendant incentives and disincentives reduce the total amount of wealth available to be shared? Is making all people equally poor an acceptable solution to inequality?

Are you careful not to judge people by the color of their skin yet sometimes quick to make judgments based on economic status? If so, do you make distinctions based solely on wealth or lack thereof or does it make a difference to you how an individual became rich or poor?

Do you contribute to charity? Would you gang up with your neighbors and force others to contribute to your charities? What makes it OK to hire Congress to do this for you?

Do you believe in a right to privacy? Should citizens accused of a crime be considered innocent until proven guilty, with the burden of proof falling on the prosecution? Do you believe the accused have a right to remain silent? How would you feel if the government compelled a vast network of informers to file reports on the behavior of citizens whether or not they’ve been accused of a crime? OK then, what is the moral principle that allows you to make exceptions to these beliefs when it comes to a person’s income and investments?

When you see corruption between business and politicians, are you inclined to shrug and accept it as the nature of man? If corruption touches your own business are you impelled to speak out, do you tolerate it in silence while sticking to your principles, or do you seek your share of the spoils because everyone else is doing it?

Do you resent being asked to justify your economic beliefs or the moral foundation they rest on? Do your ends always justify your means? Do you feel entitled to having your beliefs respected solely because they are yours? Would you feel the same way about your mathematical beliefs?

Are you comfortable holding contradictory beliefs? When was the last time you questioned them? What do you do when you discover you hold two beliefs that contradict each other?

Are you happy to see the state to which we’ve fallen – pressure group pitted against pressure group, old against young, citizen against citizen all fighting to grab a share of the swelling portion of our national income funneled through the hands of Congress? What other outcome would you expect when moral foundations crumble?

Yes, your compromise with evil may be better than "what is", and I won't stop you from advocating for it. I'll even enjoy any fruits of liberty you manage to bring to harvest. But I'll never be distracted from the prize. I also hope once you get "enough liberty" you'll decide to join my drive for the rest of the pie.Kent McManigal … (next quote)

Burning To Death In A Hospital Bed

Why Anti-Authoritarians are Diagnosed as Mentally Ill

Home of the Slave, Land of the Fee