Font
Get A Real Job →
← The War Prayer 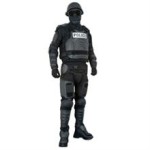 C4SS.org | Police provocateurs as instigators of crime is an old narrative. As Earth First! organizer Judi Bari famously said, “the person that offers to get the dynamite is always the FBI agent.” From the December 1999 Seattle protests on, the anti-globalization movement was rife with rumors of undercover cops always being the first to suggest smashing store windows. Nearly every “terror cell” busted by the FBI since 9/11 turned out to have been organized every step of the way by federal agents. Indeed the “terrorists” were usually so incompetent they could barely function even with FBI guidance.

Just as Charles Foster Kane manufactured news where there was none, the state manufactures crime where none would otherwise exist.

To have a religion, there must be some kind of Bible or Torah, and the Government Religion has one - the US Constitution - along with supporting documents (call them Sunnah or Talmud) such as the Declaration of Independence, the Federalist Papers, and state constitutions. Like the Bible, they are held in reverence, and simultaneously ignored in deed.Paul Bonneau … (next quote)