NewHampshireFreePress | Jailed Tax Protester Richard Simkanin died in prison at 12:43 yesterday. I spoke with Simakin’s friend, Daniel Schinzing of Keene, TX, who said that Simkanin had been experiencing weakness, chest pain, and had a large lump on his chest. News of Simkanin’s death was not a surprise, given his condition. He was 67 years old at the time of his death.

Simkanin had been released from prison earlier this year, but jailed again after claims of violation of his terms of release. He had served seven years in federal prison after refusing to withhold taxes from his employees at his Bedford, TX plastics business. He had been sentenced to an additional 7 years after his alleged violation of terms of release.

Richard’s story, according to http://www.dicksimkanin.com/

“Dick Simkanin stood up for America, for all American workers and for all American Business owners when he decided in 2000 that his company was no longer going to participate in the withholding racquet alledged forced and demanded by law from Congress. Dick had spent 6 years researching American history and foundational principles. Ultimately he was spiritually convicted that he had no business being an unpaid bookkeeper for the Federal government, therefore, he had to give his workers 100% of their pay. How American of him! Thank God for Dicks’ courage as it has cost him everything.

Ultimately, Dick was indicted after the government tried three times to no avail. A Grand Jury indicted him in June 2003, he was arrested and the criminal legal battle was on!

We have also been following the case of Dick Simkanin, the owner of Arrow Custom Plastics located in Bedford, Texas, who, in 2000 stopped withholding income related taxes from the paychecks of his employees after receiving no answers from the IRS and his elected representatives to his questions about any law that required him to withhold.

Neither the 2001, nor the 2002 grand juries would indict Simkanin for failure to withhold and turn over the tax. However, after the DOJ prevented Simkanin from appearing before the 2003 grand jury, this grand jury indicted him.

Following a hearing before a Magistrate Judge, Simkanin was released, without bail, on his own recognizance.

Simkanin’s defense rested on the fact that he has committed no crime, that there is no law that required him to withhold.

We believe this is a very courageous move by Simkanin. We believe he should have been acquitted. However, Dick Simkanin wanted the jury to reach the question of his guilt or innocence based on the material question of fact – is there a U.S. law that requires employers to withhold?”

–Life Sentence for Being Honest–

To those who haven’t heard, Richard Simkanin just passed away, while still in the custody of the federal parasite class. As many of you know, he was sentenced to seven years in a cage, by a mentally unstable, god-complex fascist named John McBryde. (I had the displeasure of witnessing the “judge’s” delusional psychoses in action at Richard’s trial.) Richard’s main “sin” was not withholding taxes from his employees–who didn’t actually owe anything.

(If the employers of the country stopped acting as thieves on behalf of the parasite class, it would be really difficult for the federal extortion racket to continue, so the federal thieves really wanted to make an example of Mr. Simkanin–to publicly hurt and torture him in order to terrorize others into being obedient.)

After seven years in a cage for being open and honest, and sticking to his principles, Mr. Simkanin got out. However, when he did not report for the “supervised release” routine, the same psychopath “judge” sentenced him to ANOTHER seven years in a cage. McBryde is certainly not alone among control freaks in thinking that VIOLENCE is the way to change people’s minds, that torturing and inflicting suffering on people is how to alter their beliefs. But with Richard, it obviously didn’t work. He left the world with few worldly possessions, but with every scrap of his integrity intact.

People can endlessly debate Mr. Simkanin’s legal theories and tactics, and what he should or shouldn’t have done. But right now, we should all acknowledge that what he did do, all legal technicalities aside, was to lay down his life for his friends. He stood up for what he believed was right, and kept doing so through torment and suffering. He acted as the antithesis of the megalomaniacs who desire dominion over the rest of us. They could not break Richard Simkanin, and they never did. The most they could do was to kill him. And they did.

Everyone dies. Few still have their integrity fully intact when they do. Richard was one of those few people. Ultimately, he gave up everything to follow his conscience. May he forever rest in peace, and may his courage serve as an example to others. 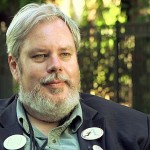 Both creationists and socialists distrust invisible-hand processes and cannot conceive of order emerging except through some sort of centralised top-down control.Roderick Long … (next quote)