Font
Spontaneous Order And Trade Without Force →
← Get A Real Job

Public Schooling And The National-Security State

FFF.org | Among the biggest disasters in U.S history has been the adoption of public (i.e., government) schooling and the national-security state and the subsequent marriage of these two governmental apparatuses.

Public schooling has inculcated a mindset of conformity, regimentation, and deference to authority within the American people. That was its purpose. That’s why governments throughout the world, including those in communist regimes, take control over the education of children and insist that parents submit their children to state-approved schooling.

By the time a child reaches the age of 18, the natural awe of the universe, the curiosity, and the thirst for learning that characterized his life from birth to 6 years of age have been smashed out of him. The ability to engage in critical thinking and to challenge authority have been destroyed. In the eyes of the state, he has become a model citizen, one whose mindset automatically conforms to whatever the authorities say and that is intellectually unable to challenge government wrongdoing at a fundamental level. Read Entire Article

Spontaneous Order And Trade Without Force →
← Get A Real Job 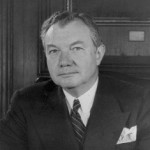 There is no such thing as an achieved liberty: like electricity, there can be no substantial storage and it must be generated as it is enjoyed, or the lights go out.Robert H. Jackson … (next quote)