Font
Ideas are Free: The Case Against Intellectual Property →
← Paranoid Pirate Asking for My Papers 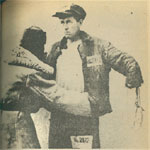 NKVD Order no. 00447 (July 30, 1937) The same order instructed to classify kulaks and other anti-Soviet elements into two categories: the First category of repressed was subject to death by shooting, the Second category was subject to labor camps. The order set upper quotas per territory and category. For example Byelorussian SSR was estimated to have 2,000 (1st cat.) + 10,000 (2nd cat.) = 12,000 anti-Soviet elements. It was specifically stressed that quotas were estimates and could not be exceeded without personal approval of Yezhov. But in practice this approval was easy to obtain, and eventually these initial quotas were exceeded by orders of magnitude. For example, in September 1937, the Dagestan obkom requested the increase of the First Category from 600 to 1,200; the request was granted the next day.

After this Order, the terms First/Second Category became standard abbreviations in NKVD documentation for “the highest measure of punishment” and “placing into corrective labor camps”, respectively.

Ideas are Free: The Case Against Intellectual Property →
← Paranoid Pirate Asking for My Papers

When you spank your child you give up your compassion and empathy.Stefan Molyneux … (next quote)

We Are All Part Of The Experiment