AlanCanfora.com | On May 4, 1970 the Ohio National Guard opened fire into a busy college campus during a school day. A total of 67 shots were fired in 13 seconds. Four students: Allison Krause, Jeffrey Miller, William Schroeder, and Sandra Scheuer were killed. Nine students were wounded.

At 11 a.m., about 200 students gathered on the Commons. Earlier that morning, state and local officials had met in Kent. Some officials had assumed that Gov. Rhodes had declared Martial Law to be in effect–but he had not. In fact, martial law was not officially declared until May 5. Nevertheless, the National Guard resolved to disperse any assembly.

As noon approached, the size of the crowd increased to 1,500. Some were merely spectators, while others had gathered specifically to protest the invasion of Cambodia and the continued presence of the National Guard on the campus. Upon orders of Ohio’s Assistant Adjutant General Robert Canterbury, an army jeep was driven in front of the assembled students. The students were told by means of a bullhorn to disperse immediately. Students responded with jeers and chants.

When the students refused to disperse, Gen. Canterbury ordered the guardsmen to disperse them. Approximately 116 men, equipped with loaded M-1 rifles and tear gas, formed a skirmish line towards the students. Aware of bayonet injuries of the previous evening, students immediately ran away from the attacking National Guardsmen. Retreating up Blanket Hill, some students lobbed tear gas canisters back at the advancing troops, and one straggler was attacked with clubs.

The Guard, after clearing the Commons, marched over the crest of the hill, firing tear gas and scattering the students into a wider area. The Guard then continued marching down the hill and onto a practice football field. For approximately 10 minutes, the guard stayed in this position. During this time, tear gas canisters were thrown back and forth from the Guard’s position to a small group of students n the Prentice Hall parking lot, about 100 yards away. Some students responded to the guardsmen’s attack by throwing stones. Guardsmen also threw stones at the students. But because of the distance, most stones from both parties fell far short of their targets. The vast majority of students, however, were spectators on the veranda of Taylor Hall.

While on the practice field, several members of Troop G, which would within minutes fire the fatal volley, knelt and aimed their weapons at the students in the parking lot. Gen. Canterbury concluded that the crowd had been dispersed and ordered the Guard to march back to the commons area. Some members of Troop G then huddled briefly.

After reassembling on the field, the Guardsmen seemed to begin to retreat as they marched back up the hill, retracing their previous steps. Members of Troop G, while advancing up the hill, continued to glance back to the parking lot, where the most militant and vocal students were located. The students assumed the confrontation was over. Many students began to walk to their next classes.

As the guard reached the crest of the Blanket Hill, near the Pagoda of Taylor Hall, about a dozen members of Troop G simultaneously turned around 180 degrees, aimed and fired their weapons into the crowd in the Prentice Hall parking lot. The 1975 civil trials proved that there was a verbal command to fire. 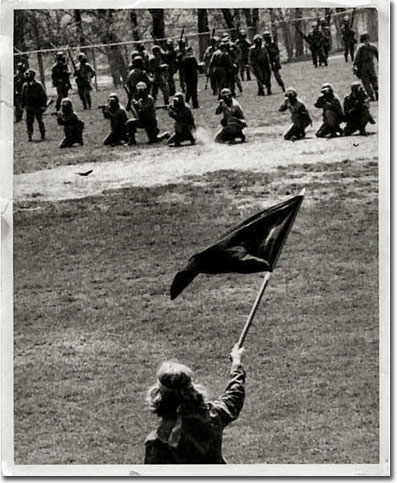 “…it’s very hard to ignore that Kent State thing. They were down there, man, ready to do it. You can see them, they’re all kneeling there, they’re all in the kneeling position and they got their slings tight and they’re ready to shoot. And there’s this kid, this long-haired kid standin’ there with a flag wavin’ it… I mean, I cannot be a man, and be a human, and ignore that.” 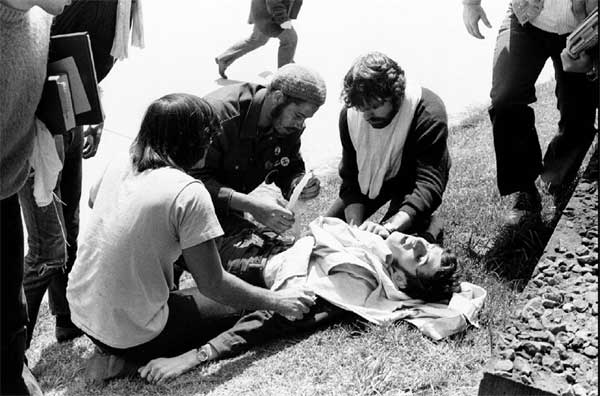 Demonstrators tend to fallen student John Cleary after he was shot and wounded by the Ohio National Guard on the campus of Kent State University May 4 1970. 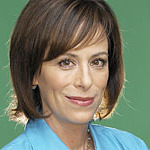 Student teaching is the hardest job there is. Secondary school kids didn't want to be there. I skipped out one afternoon and went to the mall, and there were some of my students there. But they couldn't report me, could they?Jane Kaczmarek … (next quote)

Consent Is Not the State’s Cup of Tea

A Reason Not To Vote