KentForLiberty.com | It’s a matter of voluntary versus coercion. 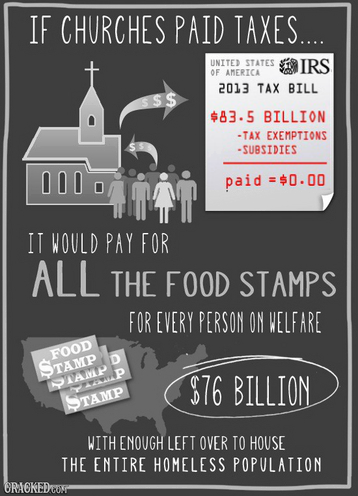 People aren’t forced to give money to churches, but “taxation” always comes at the barrel of a gun. Churches actually do more good for poor people than “welfare” ever has, and giving the State more money is never a good idea.

I see what the local churches do for people in need. I see the food banks and the clothes “closets” and have seen preachers pay for hotel rooms for homeless, stinky men. I see preachers with second jobs, because they aren’t paid enough by their church to survive.

I know some people look at the flashy exceptions- the rich churches with lavish furnishings and vast amounts of property, and preachers in rich suits and luxury cars- the ones who are famous and on TV… but those are truly the exceptions. And, using the exceptions as an excuse to “tax” them all, and send more money to our real enemy, is self-destructive.

Focusing on the bad actors in churches ignores the bad actors of the State. Those promoting the “taxing” of churches pretend that the IRS actually uses the stolen money efficiently, and to help people in need- and pretend that “taxation” (and “government” in general) isn’t a prime cause of poverty in the first place. And that is so ridiculous I just have no response to that other than “Seriously? Have you been paying attention… ever?” Read Entire Article

If the principle of government were extended consistently and uniformly throughout society, true chaos would result – every civilized relationship would give way to the gun or knife; force, not persuasion.Fred Woodworth
The Match, a journal of ethical anarchism. … (next quote)

Avoiding Hypocrisy In An Unfree World