BBC | In the 1950s, the Seventh-day Adventist Church struck an extraordinary deal with the US Army. It would provide test subjects for experiments on biological weapons at the Fort Detrick research centre near Washington DC. The volunteers were conscientious objectors who agreed to be infected with debilitating pathogens. In return, they were exempted from frontline warfare.

Fort Detrick was working on weapons it could use in an offensive capacity as well as ways of defending its troops and citizens.

The research involved anthrax, other lethal bacteria and biological poisons. The scientists also conducted tests on an unsuspecting American public.

More than 2,000 volunteers, nicknamed the “white coats”, passed through Fort Detrick between 1954 and 1973, where they worked as lab technicians, as well as offering up their bodies for science.

One white coat, George Shores, tells of how he was infected with tularaemia or rabbit fever. 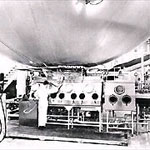 A giant metal sphere, known as the Eight Ball because of its resemblance to a snooker ball, was used in the experiment. Technicians exploded prototype bio-weapons inside the structure.

“They had like telephone booths all the way around the outside of the Eight Ball and you went into the telephone booth and shut the door and put on a mask like a gas mask.

“It was hooked up to the material that was inside the Eight Ball and you breathed it in,” explained Mr Shores.

He began to feel ill before too long.

“Even my gums hurt. I don’t think I have ever been so sick in all my life. First it started as a headache and achy feelings and it just kept progressing.

“I just wanted to breathe enough to keep alive. I would just take little gasps of breath and I would hold it for as long as I could because it hurt so bad.

“I can imagine if someone was using that agent in the battlefield the soldier would just have to lie down – he would not be able to function.”

The white coat volunteers were not infected with the most lethal microbes. Their role was to test the effectiveness of new vaccines and antibiotics and as soon as they became ill, they were given medical treatment. Within a few days, George Shores began to recover.

But America’s Institute of Medicine is conducting a study of more than 6,000 veterans who say their health has been compromised by secret tests in the Cold War years.

Some of these were veteran sailors who were involved in tests known as SHAD – Shipborne Hazard and Defense – which involved spraying lethal chemicals such as sarin and nerve gases in the open sea.

The BBC programme makers also obtained declassified documents prepared by the US Department of Veterans Affairs which refer to a study of nearly 100 SHAD veterans who have since died.

It found the veterans were three times more likely to have developed one of a group of killer diseases as a sample group in the general population.

It concludes: “This study does suggest that veterans who participated in Project SHAD may be at increased risk for cerebrovascular and respiratory diseases.”

But it wasn’t just the white coat volunteers and sailors who were subject to experiments. Scientists used what they thought was a harmless simulant in major bio-weapon tests across US cities and on public transport.

It was a bacteria which they believed was harmless but which would mimic the dispersal of deadly biological agents such as anthrax.

But later research showed that the strain of Bacillus globigii, or BG, did pose a risk to people who were ill or whose immune system was failing.

The programme hears from a retired scientist whose job in 1966 was to drop light bulbs carrying BG on the New York subway. He would then measure how the simulant might spread in the event of a real attack, using a motorised vacuum devise concealed inside a suitcase.

“I think it spread pretty good because you had a natural aerosol developed every few minutes from every train that went past.” Read More

Iniquity, committed in this world, produces not fruit immediately, but, like the earth, in due season, and advancing by little and little, it eradicates the man [/men]who committed it. …justice, being destroyed, will destroy; being preserved, will preserve; it must never therefore be violated.Manu 1200 bc … (next quote)

10 Rules for Dealing with Police