Font
The Obsession To Organize →
← Anarchism And American Traditions

Give Me Freedom And Shut The F**k Up

YuvaRevolution.org | It is common to hear sentiments expressed which violate virtually every tenet of reason and common sense such as, “we are the government.” The useful collective term “we” has enabled an ideological camouflage to be thrown over the reality of political life. If “we are the government,” then anything a government does to an individual is not only just and untyrannical but also “voluntary” on the part of the individual concerned. If the government has incurred a huge public debt which must be paid by taxing one group for the benefit of another, this reality of burden is obscured by saying that “we owe it to ourselves”; if the government conscripts a man, or throws him into jail for dissident opinion, then he is “doing it to himself” and, therefore, nothing untoward has occurred. Under this reasoning, any Jews murdered by the Nazi government were not murdered; instead, they must have “committed suicide,” since they were the government (which was democratically chosen), and, therefore, anything the government did to them was voluntary on their part. One would not think it necessary to belabor this point, and yet the overwhelming bulk of the people hold this fallacy to a greater or lesser degree.

The Obsession To Organize →
← Anarchism And American Traditions 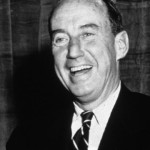 Nothing so dates a man as to decry the younger generation.Adlai Stevenson … (next quote)