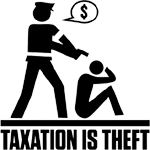 Voluntaryist.com | Most of the people I have spoken to over the years think that government taxation is not theft because government is a necessary social institution. The attainment of the common good requires taxes to support government. Thus, those who evade paying their proper share or those who object to how their tax money is spent (the pacifist – on war; the Catholic – on abortion; the anarchist – in general) must be threatened with force beforehand. If they refuse to pay they will ultimately have their property confiscated and sold at auction or they will find themselves imprisoned (either after a conviction for violating the tax laws or for contempt of court [for refusing to obey a judge’s orders to cooperate]). If they violently refuse to cooperate with the marshals that come to take their property or arrest them, they will be subdued or killed.

These actions by government agents are “stealing” and/or “killing” by any commonly accepted definition of those terms. Aren’t government employees doing the same thing as members of the criminal gang: taking property or life without the owner’s consent? As Murray Rothbard (FOR A NEW LIBERTY, 1973, p. 55) once asked: Is there a way to define taxation so as to morally differentiate it from robbery?

Furthermore, consider the fact that there is a moral way to collect taxes (without force or violence): Try rational argument and persuasion.

If government is really as necessary as most people think, then it ought to be quite simple to convince others to support it (or at least support as much of it as they believe is necessary). Instead of threatening people, educate them. Convince them. Demonstrate why they ought to contribute to government. Threatening them with force is not a way to answer their arguments against paying.

If those who refuse to pay taxes at all, or who selectively refuse to pay part of their taxes (for whatever reason), cannot be convinced, then they ought to be left alone. They ought not to be placed in jail or stolen from. Deny them whatever government services they are not willing to pay for.

And, if the supporters of government are still unable to collect enough in taxes to support the amount of government they deem necessary, then they ought to dig deeper into their own pockets. The fact that government is a “good cause” is no justification for stealing from or killing those who refuse to support it.

My challenge to people of good will is to recognize the logic and morality of my argument. The first step in universalizing the commandments against stealing and killing is to admit that taxation is theft, even if one cannot understand how government and society would function in the absence of coercive tax collection. Read Entire Article

It is hard to imagine a more stupid or more dangerous way of making decisions than by putting those decisions in the hands of people who pay no price for being wrong.Thomas Sowell … (next quote)

Don’t Look For Grown-Ups In Government