Font
The Surprising History Of Copyright And The Promise Of A Post-Copyright World →
← Television, Football And Politics

The Right To Tell The Government To Go To Hell 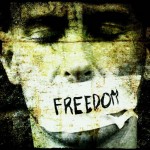 Rutherford.org | Free speech is not for the faint of heart. Nor is it for those who are easily offended, readily intimidated or who need everything wrapped in a neat and tidy bow. Free speech is often messy, foul-mouthed, obscene, intolerant, undignified, insensitive, cantankerous, bawdy and volatile.

While free speech can also be tender, tolerant, soft-spoken, sensitive and sweet, it is free speech’s hot-blooded alter ego—the wretched, brutal, beastly Mr. Hyde to its restrained, dignified and civil Dr. Jekyll—that tests the limits of our so-called egalitarian commitment to its broad-minded principles.

Unfortunately, our appreciation for a robust freedom of speech has worn thin over the years.

Many Americans have become fearfully polite, careful to avoid offense, and largely unwilling to be labeled intolerant, hateful, closed-minded or any of the other toxic labels that carry a badge of shame today. We’ve come to prize civility over freedom. Most of all, too many Americans, held hostage by their screen devices and the talking heads on television, have lost the ability to think critically.

Societies that cherish free speech relish open debates and controversy and, in turn, produce a robust citizenry who will stand against authoritarian government. Indeed, oppressive regimes of the past have understood the value of closed-mouthed, closed-minded citizens and the power inherent in controlling speech and, thus, controlling how a people view their society and government. Read Entire Article

The Surprising History Of Copyright And The Promise Of A Post-Copyright World →
← Television, Football And Politics

The authorities have been established; you have given yourselves a master, you have placed yourselves (and, thanks to your adorable counsel and initiatives, the entire country has placed itself) at the disposal of a few men. Those men use the force that you have bestowed upon them; and they use it against you. And you are reconciled with them? What were you thinking? That they would use it against themselves?Anselme Bellegarrigue … (next quote)