MarcStevens.net | No amount of redefining your way out of the terms used in a question can compensate for an absence of facts and evidence to support your claims, but lets listen to a statist try anyway, here is a sample of some of the logical excrement:

As I mentioned during the podcast, there are a myriad of mental disorders, like schizophrenia, where sufferers actually believe in things that are not there and that defy objective reality. It is not useful, nay; counterproductive and unhealthy, to continue to debate someone who does not accept empirical evidence and objective reality; that’s how we got to statism in the first place. If we are to object to and reject statism because of the obvious violence and schizophrenic beliefs that come with it, we must proceed with caution against its most fringe enablers to avoid such distasteful discourse.

Complete Liberty Inside Out →
← Willful Ignorance 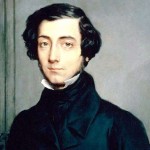 It’s not an endlessly expanding list of rights – the “right” to education, the “right” to health care, the “right” to food and housing. That’s not freedom, that’s dependency. Those aren’t rights, those are the rations of slavery – hay and a barn for human cattle.Alexis de Tocqueville … (next quote)

The Mafia Is Better Than The State